Georgia lost up to 3,000 men in S. Ossetia conflict - source 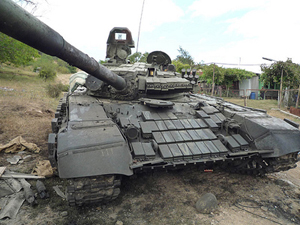 Georgian tank in streets of Tskhinval

About 3,000 Georgian soldiers and police were killed during its recent attempt to take control of South Ossetia, a Russian intelligence source said Monday.

Georgian troops attacked the breakaway republic on August 8, killing a number of Russian peacekeepers and hundreds of civilians. In response, Russia launched a five-day military operation to "force Georgia to accept peace."

"Our data gathered from various sources indicates that Georgia lost up to 3,000 servicemen and police in attack on South Ossetia," the source said, adding that Georgia's Western allies also were aware of numbers involved.

"Georgia's leadership is attempting to cover up the real scale of the losses and is officially reporting about 70 confirmed deaths," he said. "But their figures are significantly understated."

The source said Georgia suffered such heavy losses because of the poor training and low morale of its military personnel, especially reservists.

"Besides, many Georgian soldiers, who are accounted for as MIA, are deserters," he added. "Georgian police are still looking for these people, who simply left the battlefield."

Official statements last week put Russia's losses in the short conflict with Georgia at 66 killed and at least 340 wounded.