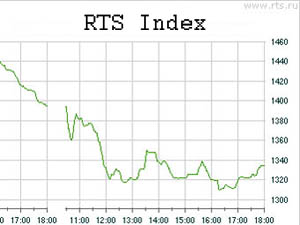 "The government's task right now is to ensure sufficient liquidity on the domestic market. There are such possibilities, and the orders have been given," Medvedev told a meeting of the Russian Union of Industrialists and Entrepreneurs, or RSPP, at the Kremlin.

Adopting a tough tone and stern stare, Medvedev used the Kremlin meeting to warn the West against imposing sanctions over Russia's war with Georgia over separatist South Ossetia.

"It's senseless to pressure Russia with sanctions," Medvedev said in remarks carried on state television. "They can shut a couple of sources of [revenue] to a banana republic and make its situation dramatic. It won't work like that here."

"Sanctions are a weapon that will backfire," he said. "If attempts are made to introduce sanctions, damages will be symmetrical."

The RTS Index has dived 42 percent since oil prices peaked at $147 on July 11, falling victim to the global credit crisis and dropping commodity prices.

Concerns over the investment climate, brought on by the TNK-BP shareholder dispute, a government-led attack on coal and steel firm Mechel and increased political risk after the war in Georgia, have compounded losses and capital flight.

RSPP head Alexander Shokhin said during the meeting with Medvedev that current policies "may turn out to be inadequate," Bloomberg reported.

"The stock market is plunging, capital is fleeing, there is a severe shortage of liquidity in the banking system, prices for many core exports are falling and inflationary pressures are strengthening," Shokhin said, Bloomberg reported.

Medvedev sought to calm business leaders by assuring them no crisis existed.

"Despite all the global economic problems there are today, the situation in our economy is on the whole completely stable. We definitely have no crisis or a pre-crisis situation," he said.

Bankers and analysts warn that the debt market in Russia has already been largely shut to third-tier banks and expect that several could face problems repaying their debt. MDM Bank earlier this month laid off its entire equity research team amid growing troubles.

Standard & Poor's estimates that Russian firms and banks still hold $45 billion worth of foreign debt due to be refinanced by the end of the year.

Medvedev said Russian capital, from state and institutional investors, should play a bigger role in domestic financial markets and called for the use of "accumulated resources" to help stabilize the markets, Reuters reported.

David Yakobashvili, chairman of leading dairy producer Wimm-Bill-Dann, told Bloomberg in an interview Monday that the firm was considering buying back 10 percent of its stock, following a three-month fall of 43 percent. LUKoil has made a similar move, while speculation that Norilsk Nickel's biggest shareholders may do the same lifted its stock on the MICEX by 4.5 percent Monday.

"There is not likely to be a specific directive to buy back shares, but the Kremlin has very likely let it be known that it expects every oligarch to play his or her part," said Chris Weafer, chief strategist at UralSib.

Weafer warned that share buybacks and a proposal being mooted to use the National Welfare Fund to prop up Russia's markets would be ineffective and provide only a temporary solution.

Finance Minister Alexei Kudrin reiterated Monday that the government would consider tapping the National Welfare Fund - a portion of the stabilization fund saved for riskier investments.

"We do not exclude the possibility of transitioning to placement on the Russian market, but that time will be very seriously calibrated, when we have minimized the negative consequences of that placement," Kudrin said, Interfax reported.

Analysts said what the market needed most was a clear economic program from Medvedev, now four months into his presidency.

"It's important that Medvedev is communicating with the market," said Roland Nash, head of research at Renaissance Capital. "Concrete actions are needed to back that up."

Medvedev provided few concrete answers on Monday, saying only that the Kremlin would not review its economic policy following the war in Georgia.

"Despite the military solution [in Georgia], nothing in the principles of economic policy will be changed," Medvedev said.

"We are ready, and rightly so, to join the WTO," Medvedev told the meeting. "The WTO is not a carrot, but a set of serious obligations. If we [join], we must do it in a civilized manner, not so we are scared into it."

He also said the question of additional tax cuts for the oil industry was "complicated and not simple" but would soon be discussed. Oil firms have lobbied for the change, while other companies have urged the government to cut the value-added tax. Shokhin said in a briefing later Monday that he did not expect a decision to be made on any tax cuts before Prime Minister Vladimir Putin appeared at the Sochi investment forum later this week.