South Ossetia in mourning 40 days after the war 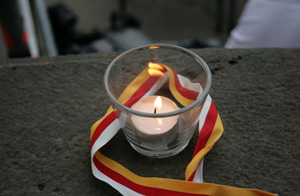 It's traditional in Orthodox Christianity for mourners to attend church services 40 days after the death of their loved ones. Authorities in Tskhinval say more than 1,500 Ossetians lost their lives in the conflict.

Memorial services for the victims of the war in South Ossetia are also being held across Russia.

A special commemoration was held in Our Lady of Sorrows church in Moscow. Mourners paid their respects, with many lighting candles for those who died during the conflict.

Overnight, thousands gathered in front of the Christ the Saviour Cathedral in the capital to observe a minute's silence.

The conflicts between Georgia and the republics of South Ossetia and Abkhazia have a long and complex history.

Georgia entered the Russian Empire in the early 19th century. At this stage, neither Abkhazia, nor South Ossetia was under Tbilisi's jurisdiction.

South Ossetia had been absorbed into Russia several years earlier and Abkhazia was incorporated in 1910, as Russia gradually gained control of the South Caucasus.

"Abkhazia was a separate country historically, the Abkhazian population never agreed, in their hearts at least, to a unification with Georgia," says Sergey Arutyunov from the Caucasus Department of the Russian Academy of Science.

The 1917 Soviet Revolution 1917 prompted a redrawing of the Caucasus map.

South Ossetia was made an autonomous region within Georgia in 1922, while Abkhazia remained a republic in its own right, until Joseph Stalin incorporated it into Georgia in 1931 - shortly before the notorious purges.

During the Soviet regime, Abkhazia retained autonomous status within Georgia. Secessionist voices in the area were relatively silent during Soviet rule, until Gorbachev's Perestroika sparked a fresh wave of nationalism.

But when South Ossetia and Abkhazia claimed independence in the early 1990s, Georgia, which considered the regions to be part of its territory, sent in troops.

After a 1994 ceasefire deal, Abkhazia and South Ossetia became de facto independent and peacekeeping forces, made up largely of Russian troops, were deployed in the region.

However, sporadic violence continued with Georgia repeatedly accusing Russia of stirring up tensions.

But after Georgia's attack on South Ossetia in August 2008, Moscow said it had no other option but to take both republics under its protection, upon their request.

At the end of August, Russian President Dmitry Medvedev signed decrees, formally recognising the independence of Abkhazia and South Ossetia.

When Kosovo was granted independence, Moscow warned this would trigger a separatist domino effect all over the world.

Many analysts then said further changes were inevitable.

"Abkhazians and South Ossetians perhaps have even more right to be recognised as separate nations and independent states by the world community than Kosovo," Sergey Arutyunov says.

Now, in keeping with the Orthodox tradition, 40 days after Georgia's attack South Ossetia is mourning those killed by the conflict.

Garik Bestayev was one of them. His relatives say he was a real patriot, who stood up for his beliefs and died for them.

"He dreamt of peace for South Ossetia. He dreamt his children would live in an independent republic," they say.

Watch more on this story from Russia Today or here:

To find out more on the conflict, please follow the links below:

Russian deaths will not be tolerated - Medvedev

It's America's fault - US citizen in the conflict zone

Georgia vs. South Ossetia: roots of a 100-year conflict

We will push Georgians out of Kodori Gorge - Abkhazian president

Talks possible only after Georgians pull out - Russia

Ossetian refugees risk lives to bring and bury their dead

Five days that shocked the world

Ruined Tskhinval picking up the pieces

Saakashvili may be put on trial in Russia, say prosecutors

`Nothing can stop our independence now' - breakaway republics