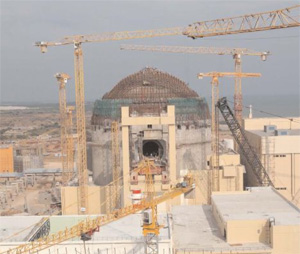 Several more reactors have been under construction. A mid-2006 announcement pledged US$ 665 million in 2007 towards completing Rostov / Volgodonsk-2, Kalinin-4 and Beloyarsk-4.

In October 2006 Russia formally adopted a US$ 55 billion nuclear energy development program, with $26 billion of this to 2015 coming from the federal budget. The balance will be from industry (Rosatom) funds and no private investment is involved. After 2015 all funding will be from Rosatom revenues.
Rosatom's long-term strategy up to 2050 involves moving to inherently safe nuclear plants using fast reactors with a closed fuel cycle and MOX fuel. Fossil fuels for power generation are to be largely phased out. Starting 2020-25 it is envisaged that fast neutron reactors will play an increasing role in Russia, and an optimistic scenario has expansion to 90 GWe nuclear capacity by 2050.

Rosatom is also planning to construct seven or eight floating nuclear power plants by 2015. The first has been under construction since April 2007 with intended completion in 2010 to supply the Severodvinsk region and the second is planned for 2012 commissioning at Pevek on the Chukotka peninsula in the far east. Each has two 35 MWe KLT-40S nuclear reactors Soviet exports of enrichment services began in 1973, and Russia has strongly continued this, along with exports of radioisotopes. After 1990, uranium exports began, through Tenex.

The latter "Megatonnes to Megawatts" program supplies about 15% of world reactor requirements for enriched uranum and is part of a US$ 12 billion deal between US and Russian governments, with a non-proliferation as well as commercial rationale. However, Rosatom confirmed in mid 2006 that no follow-on program of selling Russian high-enriched uranium from military stockpiles was anticipated once this program concludes in 2013. The 20-year program is equivalent to about 153,000 tonnes of natural uranium.

It was also pushing ahead with plans to store and probably reprocess foreign spent fuel, and earlier the Russian parliament overwhelmingly supported a change in legislation to allow this. The proposal involved some 10% of the world's spent fuel over ten years, or perhaps up to 20,000 tonnes of spent fuel, to raise US$ 20 billion, two thirds of which would be invested in expanding civil nuclear power. However in July 2006 Rosatom announced it would not proceed with taking any foreign-origin used fuel.

Atomstroyexport (ASE) has three reactor construction projects abroad, all involving VVER-1000 units. First, it took over building a reactor for Iran at the Bushehr power plant, a project commenced by Siemens KWU but then aborted. Then it sold two large new AES-91 power plants to China for Jiangsu Tianwan at Lianyungang and two AES-92 units to India for Kudankulam. It is likely that ASE will build a second unit at Bushehr and agreements have been signed for two more at Tianwan in China. In 2007 a memorandum of understanding was signed to build four more units at Kudankalam and more elsewhere in India.

Russia's policy for building nuclear power plants in non-nuclear weapons states is to deliver on a turn-key basis including supply of all fuel and repatriation of used fuel for the life of the plant.

In October 2006 its bid for two AES-92 units for Belene was accepted by Bulgaria. ASE leads a consortium including Areva NP and Bulgarian enterprises in the EUR 4.0 billion project.

ASE is reported to be under consideration by Fortum to supply Finland's sixth nuclear power reactor if it is built at Loviisa. It is also considered a leading contender to build two large reactors in Belarus, and will almost certainly build the first of a series of small reactors (probably VBER-300) in Kazakhstan.

A potentially wide-ranging memorandum of understanding with Enel of Italy is for cooperation on nuclear power projects in Eastern and Central Europe, using Russian technology. Most of these export prospects bring ASE into competition with western reactor vendors.

Since 2006 Rosatom has actively pursued cooperation deals in South Africa, Namibia, Chile and Morocco as well as with Egypt, Algeria, Vietnam and Bangladesh. Tenex has also entered agreements to mine and explore for uranium in South Africa (with local companies) and Canada (with Cameco).

In February 2008 ASE formed an alliance with TechnoPromExport (TPE) to rationalize their international marketing. TPE boasts of having completed 400 power projects in 50 countries totalling some 87 GWe.

Overall there is increasing acceptance of the need to press ahead with nuclear energy in Russia while expanding the country's role internationally at both the front and the back end of the fuel cycle.

Russia's future international role will be built on its reputation over the last decade as a reliable commercial provider of fuel-related services. It is now engaged with international markets in nuclear energy, well beyond its traditional eastern European client states.

President Putin's Global Nuclear Infrastructure Initiative was announced early in 2006. This is in line with the International Atomic Energy Agency (IAEA) 2005 proposal for Multilateral Approaches to the Nuclear Fuel Cycle (MNA) and with the US Global Nuclear Energy Partnership (GNEP). The head of Rosatom said that he envisages Russia hosting four types of international nuclear fuel cycle service centres (INFCCs) as joint ventures financed by other countries. These would be secure and maybe under IAEA control. The first is an International Uranium Enrichment Centre (IUEC) . The second would be for reprocessing and storage of used nuclear fuel. The third would deal with training and certification of personnel, especially for emerging nuclear states. The fourth would be for R&D and to integrate new scientific achievements.

Regarding reactor design, Rosatom is keen to be involved in international projects for Generation IV reactor development and is keen to have international participation in fast neutron reactor development, as well as joint proposals for MOX fuel fabrication. In April 2007 Red Star, a government-owned design bureau, and US company Thorium Power agreed to collaborate on testing Thorium Power's seed and blanket fuel assemblies at the Kurchatov Institute with a view to using thorium-based fuel in VVER-1000 reactors.
In 2006 the former working relationship with Kazakhstan in nuclear fuel supplies was rebuilt. Kazatomprom has agreed to a major long-term program of strategic cooperation with Russia in uranium and nuclear fuel supply, as well as development of small reactors, effectively reuniting the two countries' interests in future exports of nuclear fuel to China, Japan, Korea, the USA and Western Europe.

In April 2007 a joint venture company to manufacture the turbine and generator portions of new nuclear power plants was announced by French engineering group Alstom and JSC Atomenergomash. The 49:51 Alstom Atomenergomash LLC joint venture is established at Podolsk, near Moscow. First production is expected in 2011 with output reaching three 1200 Me turbine and generator sets per year in 2013.

In September 2007 Mitsubishi Heavy Industries (MHI) signed an agreement with Russia's Ural Turbine Works (UTZ) to manufacture, supply and service gas and steam turbines in the Russian market. Under the agreement, MHI will license its manufacturing technologies for large gas turbines and steam turbines to UTZ - part of the Renova Group. The agreement also calls for a joint venture to be established in Russia to provide after-sales service.

From 2001 Russia has been a lead country in the IAEA Project on Innovative Nuclear Reactors and Fuel Cycles (INPRO). In 2006 Russia joined the Generation-IV International Forum. Russia is also a member of the NEA's Multinational Design Evaluation Program.