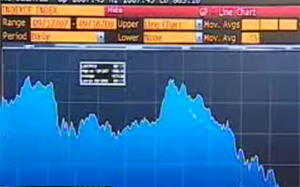 Markets were unsettled by the fallout from the mortgage crisis in the United States and the collapse of investment bank Lehman Brothers, with Russian stocks plummeting.

"We have no doubt that the safety nets that have been put into place in the Russian economy over the past few years will work to good effect," Putin said during a meeting with the Azerbaijani president.

Earlier Tuesday, Russia's benchmark RTS and MICEX indexes plunged 11.47% and 17.45%, respectively, compounded by the withdrawal of capital from the country.

"We are studying the possibility of using long-term instruments by the Central Bank," Putin said. "We will act carefully and judiciously."

He added that the Finance Ministry had injected 150 billion rubles ($6 billion) into the Russian financial market in liquidity provided to domestic lenders through repo auctions, while the Central Bank contributed 325 billion rubles ($13 billion) to the repurchase auctions.

Putin said the worldwide crisis was certainly affecting the Russian economy because it was a part of the global economy, but stressed that it would have no problem riding out the bumpy patch.

President Dmitry Medvedevsaid Monday the Russian market was not in danger and ordered the government to boost liquidity.

A Russian Central Bank deputy chairman said Tuesday there was no need to boost lending to banks.

"There is no need to expand lending to banks, at least for the time being," Konstantin Korishchenko said.

He said the Central Bank's current priority was to sustain liquidity levels in the banking sector to enable its smooth operation.

The Russian Cabinet met late Tuesday to discuss Russia's financial markets and what measures should be taken to stabilize the situation.

The meeting was chaired by First Deputy Prime Minister Igor Shuvalov, but no details of the discussions were announced.