World Gorbachev cautions against willingness to take up arms 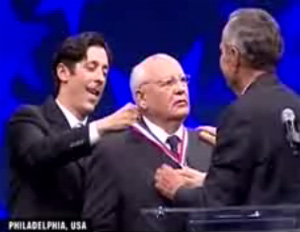 Mikhail Gorbachev has criticized the readiness of political leaders to resort to armed conflict to resolve their problems in a Liberty Medal acceptance speech in the U.S.

The former Soviet leader was awarded the Liberty Medal for his role in ending the Cold War.

"We must speak out loudly today about the dangers of a militarization of political mentality," Gorbachev said at the National Constitution Center in Philadelphia on Thursday.

He said that the world had unfortunately failed to take advantage of the opportunities that had opened up with the end of the Cold War.

"Finding no answers to global challenges, politicians take up arms more often, and there is nothing more absurd and unreasonable than this," he said.

Gorbachev said he believed a structure could be created that would make impossible the use of force in conflicts such as the recent five-day war between Russia and Georgia in South Ossetia.

He also said the United States had made a serious mistake in declaring the Caucasus an area of U.S. strategic interest.

Speaking before the award ceremony, he criticized comments by U.S. Secretary of State Condoleezza Rice calling Russia "a bully" for its role in the conflict in Georgia. "The United States and Europe must stand up to this kind of behavior, and all who champion it," Rice said on Thursday.

"I believe that the secretary of state should be more careful and should show greater calm and responsibility for her judgment in calling for the West to unite against Russia," Gorbachev said.

During his speech he also urged a policy of cooperation rather than confrontation between the U.S. and Russia, and reminded listeners of the difficulties that Washington and Moscow had overcome to achieve rapprochement in the late 1980s.

The former Soviet leader was selected as the Liberty Medal laureate in June. When the announcement was made, Bush called Gorbachev "a great world leader and a dear friend."

Gorbachev, respected in the U.S. and Europe for the reforms that led to the collapse of the Soviet Union, has blamed Georgia for provoking hostilities in its breakaway region of South Ossetia and criticized Western states for backing Tbilisi.

Georgia is the main U.S. ally in the Caucasus region and had supplied the third largest number of troops for Iraq, after the U.S. and the U.K., before its attack on South Ossetia.

"Western television didn't show what happened in Tskhinvali," Gorbachev said on CNN's "Larry King Live" in August. "Only now they're beginning to show some pictures of the destruction. So this looks to me like it was a well-prepared project. They wanted to put the blame on Russia."

Tskhinvali, the capital of South Ossetia, was attacked by Georgian forces on August 8. Local authorities have said that almost 1,700 people died in the attack. Most residents of South Ossetia have Russian citizenship, and in response to the Georgian assault Moscow launched an operation to "force Georgia to accept peace." The operation was concluded on August 12, with Russian troops deep inside Georgia.

Russia subsequently recognized South Ossetia and Abkhazia, another breakaway Georgian region, as independent states on August 26. The West criticized Russia's response to the attack on South Ossetia as disproportionate, and also slammed the recognition of the rebel provinces.

The president of the National Constitution Center, Joseph Torsella, said that "awarding the Liberty Medal should not be construed as an endorsement by the center of President Gorbachev's views on the Russia-Georgia conflict."

The Liberty Medal was previously awarded to Ukrainian President Viktor Yushchenko, former U.S. leaders George H. W. Bush and Bill Clinton, and most recently to Bono, the lead singer of the Irish group U2 and activist.