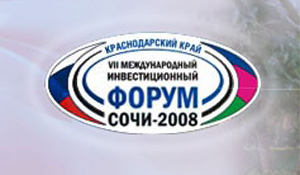 The heavy rain and wind that greeted participants of the Sochi Economic Forum last night created a symbolic atmosphere given the recent turmoil in the country's financial markets.

The forum, being held for the seventh year, opted for the title "Investment is Russia's path of development" this time out, a statement that might seem bitterly ironic given the markets' recent struggles, sagging world oil prices and instability in the financial sector.

As dancers strutted their stuff to swing music on the stage at the main reception, there was a separate, more exclusive party for government officials and other VIPs. As rain dripped through in places into the tent, guests like Deputy Prime Minister Sergei Ivanov and Sergei Shokhin, head of the Russian Union of Industrialists and Entrepreneurs, looked out on a glass dance floor set up right over the Black Sea.

While some confidence seemed to be returning inside the business community Thursday, following the announcement of government measures to help the markets, banks and oil companies, investors were looking for more positive policy statements from Prime Minister Vladimir Putin, who was scheduled to speak at the forum early Friday.

"Russia is well prepared for this crisis with the stabilization fund, and we are expecting to hear tomorrow how exactly the government will use it," said Reiner Hartmann, chairman of the Association of European Business. Despite the market situation, members of the association arrived in Sochi in surprising numbers and remained generally committed to doing business in Russia, he added.

Sochi has been in the international spotlight since it was chosen in July 2007 to host the 2014 Winter Olympic Games, and a presentation entitled "Olympic Sochi" is part of the forum's program.

"We hope that infrastructural investments move forward, both Olympic ones and those in other regions of Russia," said Andrew Somers of the American Chamber of Commerce. "People are encouraged that the financial crisis is taken seriously by the government."

As for deals coming out of the weekend, the first was announced before the event even got started, with Russian Railways head Vladimir Yakunin signing a deal with the Krasnodar Governor Alexander Tkachev on a 54 billion ruble ($2.1 billion) investment program over the next six years, Interfax reported.

Some analysts were more interested in a reality check from the government than an infusion of funds.

"The government needs to bring expectations down and tell people that the situation going forward in Russia is going to be more difficult than in the past," said Clemens Grafe, chief economy at UBS. In particular, he said, "they should not give people the impression that public money will be used to prop up stock prices; it's not the government's job."

Tony Hayward, CEO of BP, which spent much of the year in a battle with its Russian partners in joint venture TNK-BP, met with Putin on Thursday evening, BP spokesman Vladimir Buyanov said.