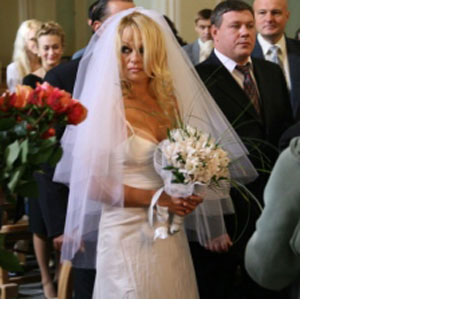 Andrei Kovalyov is a United Russia deputy whose wife runs a real estate business and several spaghetti factories. He's also a musician in the rock group Piligrim with a penchant for studded leather. But the world didn't really sit up and take notice until he made the clever move of inviting Pamela Anderson to star in his latest video.
Pammy came to Moscow last week to film the video. She also gave a news conference and attended a party held in her honor at a cigar club in central Moscow. Unfortunately, there wasn't a chance to see the video itself, but the plot is that Pamela is a runaway bride who dumps her rich groom at the altar and zooms off on a motorbike with Kovalyov in the saddle.

The photos on the Piligrim web site show Pamela demure in a white dress and veil, next to a short fat man yakking away on a cell phone. Then Kovalyov strides in wearing a red leather biker jacket and hugs her — though no sign of an onscreen kiss — before riding off on the back of his beautiful silver bike. The song is called "The Roar of Motors."

At the news conference, Pamela sat next to Kovalyov, who wore a conservative black top and trousers and looked a bit unsure of himself. She gamely answered a bizarre series of questions, ranging from her taste in personal jets (she hasn't got one) to whether the Cold War is coming back (she thinks not). All the journalists, even the ones speaking English, pronounced her name with the stress on the second syllable.

She said she took a spontaneous approach to filming the shoot. "I like to be surprised. I wasn't even clear what the concept was," she admitted.

Kovalyov described Pamela as a "biker girl" and a "sex symbol of Russia." Luckily, the video didn't require her to pose naked on a throne in a fur-trimmed crown with a Russian flag draped in the background. That was the sleeve art of his album, "Glory to Russia," whose blonde cover girl obviously didn't share Pamela's views and would rather go naked and wear fur at the same time.

At the news conference, Pamela was asked about her PETA activities. She said she wrote a letter to President Dmitry Medvedev (she stumbled a little on his name) asking him to stop the trade in baby seal furs from Canada.

Hopefully, she didn't spot the girl in the fur-trimmed jacket at the party in her honor. It was held in Grand Havana Room club, where people store their cigars in a special room and then smoke them meditatively in armchairs. Pamela sat in a VIP section in one corner, and two large guards prevented any upstarts from passing the time of day with her and action star Dolph Lundgren, who sat beside her in all his chiseled glory.

Lundgren is in Russia to make a film called "Command Performance," about a terrorist attack during a concert for the president's family. He writes, directs and stars. The film is going to include some Piligrim songs, and the band is even going to appear in the film, according to Piligrim's web site.

Kovalyov should have been a cinch for the role of Joe, an ex-biker turned rock drummer who saves the president's life after all the FSB officers are knocked out in the first five minutes. Sadly, that role went to Lundgren.
More photos from the clip on the official site of "Piligrim" band