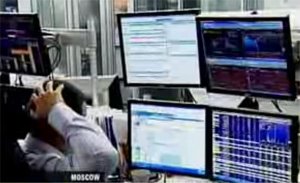 The markets rose sharply when trading resumed on Friday following two days of closure. On Thursday the government injected $20 billion to prop up the financial system after sharp falls in share prices.

The early gains on both the MICEX and the RTS have been put down to the improving financial situation on Wall Street and around the globe.

On Thursday, the two exchanges traded on a limited basis. But Russia's Finance Minister Aleksey Kudrin said normal trading would resume on Friday.

However, specialists say regulators will be keeping a careful watch on the situation.

Meanwhile, President Medvedev says Russia has enough resources to shore up Russian stock markets in the event of further losses.

"We've made the decision to ask the three banks — Sberbank, VTB and Gazprombank — to support small and medium-size banks... using budget money. They will also loan about $2.5 billion to the stock market...using equity as collateral. This will boost liquidity and stabilise the stock markets."

On Wednesday the Central Bank slashed its reserve requirements for all commercial banks, leaving them with more cash to lend.

But it was unclear whether all these measures would be enough to reassure the stock market when it opened on Friday. Yaroslav Lissovolik, Chief Economist at Deutsche Bank Russia, was in confident mood.

"This is potentially one of the triggers for a turnaround in the financial markets, and, more specifically, in the stock market. The amounts allocated by the government will be sufficient to stabilise the situation at least in the short term."

But all eyes will remain on the the US markets to see if the positive momentum is here to stay.

The current market tumble has left most Russians unfazed. There are hardly any queues at banks and exchange bureaus in Moscow. People aren't in a hurry to take their money home or swap their roubles. And while the crisis is making the headlines, the Russians don't seem to be panicking.

It seems Russia's worst financial crisis for a decade hasn't turned into a crisis of confidence among Russian market players.

Evgeny Tupikin is a financial adviser for a Moscow investment company, Broker Credit Service. He says:

"We have seen a significant increase in private clients. I think they assessed the situation: the market dropped more than 50% and this is a kind of a signal that slowly it will recover."

And while the government says it has the resources to keep things stable, is there a sure fire way to avoid losing? Dmitry Babich from Russia Profile Magazine suggests that people diversify their investments.

"Invest not only in mutual funds, not just in one bank. Invest in as many ways as possible," he says.

Babich says the current market tumble is nothing like the 1998 crash, when the ruble was devalued and many Russians saw their savings wiped out overnight.

"I'm not worried. I'm hoping for the best," a Muscovite says.

"It's all artificial. It's all exaggerated," another one adds.

Andrey Stvolinsky, who became a market player a year ago, always checks the latest at the stock exchange, but now there isn't much to check. The financial crisis has already cost him about $US 4,000.

"When I started playing on the market, I though that everything was going up. That's what's been happening for the past couple of years. But now everything's dropped," he says.

However, Andrey says his losses won't stop him from investing and is still positive about his chances of making big gains.

Watch this story on video on Russia Today TV channel

There's no panic in Russia yet: