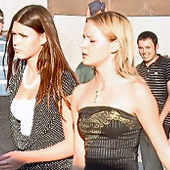 They may be said to be easygoing or plain easy, sincere or guileful, modest or extravagant. But they are always bright and remarkable. Over the years they have gained a special charm, an air of mystery, and have became a riddle for lots of foreigners. As in the past, Russian ladies conquer the Western public with their difference from Europeans, and today Russian beauties are still going global.

Europe isn't pampered with beautiful women, and that is why Russians are leading the field. Foreigners staying in Moscow point out that here beauty crowds the streets. All this makes Russian women a topic of many discussions. At one end of the spectrum, it is more common to associate extreme beauty with availability, and lots of foreigners are sure that if a girl is Russian she is determined to marry a foreigner and to leave Russia for the West. Her only desire seems to be a radiant future far from Russia, with her wealthy husband who considers himself to be a buyer. You can read in the men's eyes: "I bought her a drink - I can do what I want!" The charms of Russian women established, their other image as hardworking wives and mothers is equally enduring. The images of hard-working peasants (in imperial and Soviet Russia) are resonant and long-lived.

A better experience of Russian women comes at a higher level. If a man is more intelligent, he understands the miracle of the "Russian soul." The latter expression can't be described, just felt or experienced. It presents many riddles, and the way of solving them is paved with several obstacles. Beauty strikes first, the understanding of its origin appears next. "Russian women combine Slavic sincerity and European delicacy," "They are all witches there: magnificent eyes and posture, they will easily cast a spell upon you!"

Having faced both approaches, I found out that the interest certainly exists. But the first doesn't take into account their intellect. "Women from Russia are very kind, mild, they always take care of their family. They are obedient and want to be patronized." When I read this I was shocked - this sentence can't be true of all the nation's people. Yet, there is no smoke without a fire; such an opinion may have its origin in the women from some ex-Soviet countries that are still regarded as Russians. One of the Italian forums on the Internet is full of favorable comments that Russian women have received from their employers. "Enthusiastic, enduring, punctual, irreproachable. Plus they always manage to be perfect and elegant!"

For the second approach, independence is one of the most significant features of Russian women. They let men pay for them in restaurants, take precious presents, but it never means they are conquered. Desiring to remain a mystery, they never concede everything and always have a few cards to play. And Western men swallow this cookie, they adore Russian women. This game is interesting for both. Russian women aren't accustomed to such attitudes, as Russian men's habits differ. Having grown up among plenty of beautiful women, they don't regard it as a mystery or surprise. But they should.

Now that I have showed some stereotypes, I hope that both the Russian and foreign male populations will regard Russian women as treasures. Here we are, mysterious witches with extreme power.