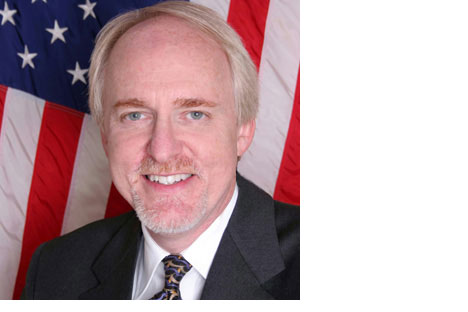 Ekho Moskvy: Good afternoon, or good evening, depending on where you're listening to us. Our guest today is the new US ambassador to Russia, Mr John Beyrle, who has agreed to speak Russian.
Beyrle: Yes, but I will read every question from the audience, which is very important to me as the new ambassador. It is very important for me to hear your opinions and understand what you think.

EM: Let's begin with a tragic date in US history, September 11, 2001, when nearly 3,000 people, including 96 Russian immigrants, were killed in a terrorist attack. Do you think terrorism is an incurable evil?
B: I'd like to hope that it can be cured, but only if we win, if we set ourselves the goal of defeating terrorism, which can only be done jointly. Any one country alone cannot defeat this evil.

EM: You have repeated nearly word for word what Dmitry Medvedev, president of Russia, said today. I don't remember it well, but he said the United States could cooperate with Russia in fighting terrorism. However, the latest developments have cooled relations between Russia and the US in different spheres. I particularly mean the suspension of joint military exercises. Will our joint struggle against terrorism be suspended too?
B: No. I have been part of relations between Moscow and Washington for nearly 30 years and have seen quite a few crises, high-tension periods in our relations. But America and Russia have always been able to carry on good, positive cooperation in the spheres of mutual interest.

EM: But military cooperation has been put on ice, so why not freeze relations between the FBI and the FSB, our intelligence services?
B: I think President Medvedev has answered this question: the fight against terrorism is too important. It calls for our joint efforts; we know that the partnership we have developed with Russia in this sphere is too valuable. I was in the States on September 11, 2001 - I was in Washington. I heard, or rather felt the planes hit the Pentagon. I was only two kilometres away from the Pentagon then, and I remember very well who was the first foreign leader to call President Bush that day. It was President Putin. On that day we saw that we have a solid, reliable and predictable partner in the fight against terrorism, Russia.

EM: Do you think Russia might curtail its cooperation in transiting American personnel and cargo to Afghanistan after the latest events, or rather because of the US reaction to the events in the Caucasus?
B: I hope Russia understands that it is protecting its interests [by providing transit routes to Afghanistan]. This is not a favour it is doing to America. I think the underlying reason for the decision is Russia's interests. That is my opinion, and hope that this cooperation will continue.

EM: You recently met with Deputy Foreign Minister Georgy Karasin to discuss the situation.
B: I often meet with him.

EM: Did you discuss possible curtailment of cooperation in Afghanistan?
B: No.

EM: You said you watched Russia, the Soviet Union and the US and their cooperation at different stages of different crises. It turned out you are a "product" of that cooperation. One of our listeners asks if it's true that your father is a Soviet soldier? I think you will have to answer this question.
B: Yes, you can say so. My father is possibly the only US private who fought both in the American and in the Soviet armies during the Second World War. When he finished school in his native state, Michigan, in 1942, he volunteered for military service, for the airborne force.
In June 1944 he landed in Normandy as part of the American force on D-Day. But he was captured soon afterward and sent to a German POW camp. They questioned him for hours, for 20 hours and more [a day], and one day he simply couldn't stand it any more and called the German "a son of a bitch."
After that he went to a military hospital. He was later sent to another camp, in Germany, where they received Red Cross parcels with such valuables as cigarettes. Cigarettes were like money for POWs, and he once won 60 packs at dice. They used them to bribe a German guard, and he and his American comrades escaped from the camp.
They wanted to take a train for Warsaw, but it turned out their train was heading for Berlin. In Berlin, they were arrested by the Gestapo and tortured, though he never told us about these horrible details. I learned about them later, when I read his biography.
He was then sent to another camp, from which he escaped in January 1945. This time he walked east because he heard the Russian artillery there; it was the 2nd Belarusian Front. He walked towards the sound; Soviet units were very close. Three days later he saw Soviet tanks, ran out and shouted in his broken Russian, "I am an American comrade."
Dad could speak a little Polish, and he managed to convince them he was an American private who wanted to fight Hitler. His desire to fight Nazis probably doubled after the POW camp. After much debate, they let him be their machine-gunner; they gave him the PPSh-41 machine-gun and he helped liberate the camp from which he had escaped.
But he was gravely wounded a week, or possibly two weeks later and woke in a Soviet hospital in Poland. He had been there for maybe two weeks when one day he heard there would be an inspection led by a Soviet officer. That officer was Marshal Georgy Zhukov.
When the marshal heard there was an American paratrooper who had fought for the Red Army in the hospital, he went to him and asked him through an interpreter, "Are you okay? What can I do for you?"
My father's big problem was that he had no documents. Zhukov helped him: the next day Dad received a letter from the Soviet command confirming that he was an American paratrooper and ordering that he be sent to Moscow. In Moscow a Soviet officer took my dad to the US Embassy.
He was interrogated for a long time in the embassy because Joseph Beyrle was believed to have died in France in June 1944. His family in America had received the official notification and held an obituary service for him. Eventually they established his identity and sent him home. He celebrated VE-Day in Chicago.

EM: John Beyrle, the son of Joseph Beyrle, is now the US ambassador to Russia. How can the son of such a father deal with the problems between our countries? I will ask you several questions compiled from questions we received from our listeners.
Now, US officials, while censoring Russia for its disproportionate use of force in Georgia, have not found suitable words to criticise the actions of Georgia and President Saakashvili, who ordered a military operation against peaceful Tskhinvali. Why this selective approach? Why were Russia's actions "disproportionate"? And why not a word of condemnation for Georgia?
B: There was one word.

EM: Only one?
B: We kept saying that the use of military force would not settle the conflict. To the last possible moment we tried to convince the Georgian authorities not to yield to provocations - and there had been provocations staged by South Ossetia. This is why we insisted - and not only we, our European partners did as well - that the Russian troops should withdraw, pull out from the Georgian territory.

EM: That was the next stage. But Prime Minister Putin said before, and keeps saying now, that the US partners approved of Saakashvili's actions. Saakashvili could not have launched such a military venture without informing his American partners or even asking their permission. This is the opinion of our prime minister and our president.
B: Unfortunately, I cannot accept this view, because I know personally how hard we had tried to keep the Georgian authorities from taking that step. We realised very well what the consequences would be if they used military force.

EM: But facts don't lie. Prime Minister Putin said the US had armed and equipped the Georgian army, that it had trained it - there are facts proving that special instructors trained the Georgian special forces that were the first to enter Tskhinvali. These are facts, Mr Ambassador.
B: It is not a secret that we provided weapons to and held joint exercises with Georgians, with Georgian troops. They served together with our guys in Iraq, and they are serving together with NATO troops in Afghanistan. So it was not a secret; it was not meant to be a surprise. But using this fact to conclude that Georgians learned from American soldiers, that we encouraged them, that we gave the green light to Saakashvili - sorry, I can't accept this.

EM: Another example which Russian Foreign Minister Sergei Lavrov mentioned. During the conflict, when Georgians engaged Russian troops, US aircraft airlifted a Georgian brigade from Iraq to very close to the combat area, the battlefront where Georgian and Russian troops were fighting each other.
B: When the Georgians asked for such assistance, there was the danger of Russian troops moving all the way to Tbilisi. So we had no right to deny Georgia's request for transportation. But it was done solely to protect Tbilisi, which the Georgians thought was in danger then.

EM: This leads us to the next question. As far as I know, the US has decided to help rearm the Georgian army, am I right?
B: Our number one priority now is the delivery of humanitarian assistance.

EM: By warships, Mr Ambassador?
B: Yes, by warships. What kind of transport delivered relief aid to victims of the 2005 tsunami in Indonesia? US warships and US military aircraft. After the earthquake in Pakistan in 2005, humanitarian assistance was delivered by NATO aircraft. Nobody minded it at that time; it was apparently not perceived as a threat. It was simply the best and most efficient way to quickly deliver humanitarian cargo where necessary.
As for the alleged talks on rearming Georgia, no, we are now focused on humanitarian assistance.

EM: When President Medvedev talked with our colleagues, ABC or CNN, I don't remember, he hinted that weapons were unloaded from the ships that delivered humanitarian assistance in the Georgian ports of Poti or Batumi. I think it was Batumi.
B: I deny this allegation.

EM: What can be done to change a situation where Russia and the United States, partners in the fight against terrorism in Afghanistan and elsewhere in the world, have taken diametrically opposite stands, and when suspicion is clouding their ties over the issue of the Caucasus. You are an ambassador, and can be invited to President Medvedev tomorrow. You represent your government here. What steps towards each other can the US and Russian authorities take?
B: The best move would be to keep the channels of dialogue open. We are ready for this, and we see that Russia is ready for this too, because there will always be periods when our views will differ. But it is in such periods, especially in such periods of misunderstanding, that we should carry on our dialogue, carry on talking and try to listen to and hear what the other partner has to say, because refusal to listen and hear can lead to dangerous misunderstandings.