Russia to set new border line in the Arctic 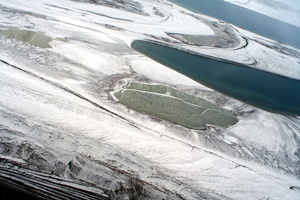 Recent discussions about national geopolitical concerns and spheres of interest have predictably reached the issue of Russia's northern border.

President Dmitry Medvedev set the task of formalizing Russia's right to a considerable part of the Arctic shelf at the September 17 meeting of the country's Security Council.

This will "turn the Arctic into Russia's resource base of the 21st century," he said at the meeting held to discuss protection of Russia's national interests in the Arctic.

According to experts, that part of the Arctic Ocean, which Russia has always considered as part of its national territory, contains about 25% of the world's shelf hydrocarbon resources. Huge offshore deposits of natural gas have been discovered in the Barents and Kara seas.

Russia reels in one-sixth of its fishing output there, and the region also has the Northern Sea Route, the shortest way from Europe to America and Asia, including for the transportation of oil and gas from Arctic deposits. That region and the adjacent northern territories have enough resources to maintain humankind for decades.

It is therefore not surprising that many countries have laid claim to its wealth.

Russia has always considered the vast triangle of 1.2 million square kilometers between the North Pole at its top and Russia's shoreline between the Kola Peninsula and Chukotka at its bottom as its own.

But the UN Convention on the Law of the Sea, which was adopted in December 1982 and came into force in November 1996, ruled that the five Arctic Circle countries - the U.S., Canada, Denmark, Norway and Russia - will each have a 322-kilometer (200-mile) economic zone in the Arctic Ocean.

To regain its loss, Russia needs to prove that its continental shelf, or more precisely the Lomonosov Ridge, is the direct continuation of the Siberian continental crust. Several Russian expeditions have been sent there to prove the point in the last two years.

A Russian flag was planted on the seabed during an expedition to the North Pole organized in August 2007 at the initiative of Artur Chilingarov, a Russian lawmaker who headed the symbolic dive beneath the North Pole last August. The mission did not provide any additional scientific arguments in favor of Russia's claim, but it has increased interest in the Arctic shelf's resources and sparked off numerous international discussions.

These expeditions also encouraged the interest of other claimants in the Arctic pie.

Canada has long laid claim to the North Pole and the resource-rich Lomonosov Ridge that lies beneath. Denmark says the disputed ridge - a 1,500-km (932-mile) undersea mountain range that runs past the pole between Siberia and North America - is a geological extension of the northern coast of Greenland.

The United States, Norway and other countries have also joined the fray. Everyone wants a piece of the Arctic pie, the larger the better.

Protecting its right to the ridge is a matter of principle for Russia, for he who gets the bulk of the Arctic shelf hydrocarbon resources will play the dominant role in the world for the next several decades.

However, the political aspect of developing undersea territories is no less important than the economic reasons, as Deputy Prime Minister Sergei Ivanov said at a meeting of Russia's Naval Board last April.

"Legalization of Russia's right to its continental shelf will increase the national territory," he said.

The political and defense aspects of the problem were also discussed at the meeting of Russia's Security Council held on September 12 at Russia's northernmost border station on Franz-Josef Land.

The meeting later continued in Moscow, where President Medvedev said: "This region is of strategic importance for the country. ...We must reliably ensure Russia's national interests in the Arctic for a long term."

To do this, the country should focus on the development of its Arctic territories and the economic revival of the Extreme North, which has been regarded as a useless burden on the budget since the 1980s. The government only sent there what meager funds had been left after all other regions and sectors received their due. As a result, its infrastructure has become dilapidated, depreciation of equipment has reached a critical point, and standards of living are inadmissibly low - with the exception of a few "oases" prospering on hydrocarbon revenues.

Left without the financial assistance of the state, Russia's fleet, including icebreakers, has degenerated so much that foreign shipping companies may soon take over control of the Northern Sea Route. Many countries have already expressed their intention to do so.

The northern territories and the Northern Sea Route are crucial for Russia's expansion in the Arctic. The country must revive them, and do it soon, or forget about developing the Arctic resources.

During the Security Council meeting, President Medvedev instructed the government to draft the fundamentals of Russian state policy in the Arctic by December 1.

Marking borders on a map is easily done, but getting international recognition for them is quite another matter.

Russia may have a chance to do so only after it files a new claim to the UN Commission on the Limits of the Continental Shelf.

Was it this procedure that Medvedev had in mind when he set the task of protecting "Russia's national interests in the region"?