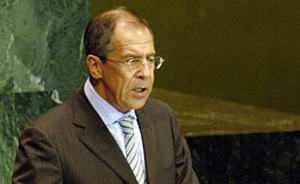 The General Assembly's annual ministerial session opens Tuesday amid uncertainty over the global economic outlook, continuing violence in the Middle East, concerns over Iran's nuclear program and the deterioration of relations between Russia and the West over South Ossetia and Abkhazia.

Apart from a general meeting with 27 EU foreign ministers to discuss Russia-EU relations, Lavrov will hold about a dozen bilateral meetings with the presidents of Cyprus and Philippines, and his counterparts from Albania, Norway, Bolivia, Spain, Pakistan, Zimbabwe and Syria.

Prior to his arrival in New York, the Russian foreign minister made a stopover Monday in Ireland where he met with Irish Prime Minister Brian Cowen and Foreign Minister Michael Martin to discuss Russia-EU relations and European security.

Following talks with his Irish counterpart, Lavrov said Moscow hoped that the United States and Canada would take part in the preparation of a new European security treaty.

"Russia's stance is that the United States and Canada should become part of this process," he said.

The idea of holding an all-European summit and drawing up a new legally binding European security treaty was put forward by Russian President Dmitry Medvedev in June.

Medvedev said at the time that all European states should be party to such a treaty "not as states associated into blocs and alliances, but as sovereign entities."

He said any new security arrangements should be based on "pure" national interests, not skewed by ideological motives, while "organizations operating in the Euro-Atlantic region" should also have the opportunity to join.

Moscow has strongly opposed the possible deployment by the United States of 10 interceptor missiles in Poland and a radar station in the Czech Republic as a threat to its security and nuclear deterrence despite Washington's assurances that the defenses are needed to deter possible strikes from "rogue states."

Lavrov is expected to address the UN General Assembly session on Saturday and clarify Russia's position on a variety of urgent international issues, including the new security arrangement for Europe.