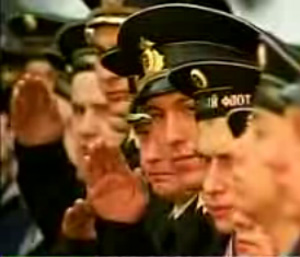 A Russian Navy squadron set off for Venezuela Monday in a deployment of Russian military power to the Western Hemisphere unprecedented since the Cold War.

During the Cold War, Latin America became an ideological battleground between the Soviet Union and the United States.

The Kremlin has recently moved to intensify contacts with Venezuela, Cuba and other Latin American nations amid strained relations with Washington after last month's conflict between Russia and Georgia.

The squadron comprising the Russian Northern Fleet's Pyotr Veliky (Peter the Great) battle cruiser and the anti-submarine warfare (ASW) ship Admiral Chabanenko will participate in exercises off the Venezuelan coast.

In the past, the world's major powers would demonstrate their naval capabilities in various regions, hinting ominously that they could disrupt enemy lines of communication in case of conflict.

Gunboats and other small warships, rather than capital warships, were an effective instrument for accomplishing such objectives.

However, the Pyotr Veliky and the Admiral Chabanenko are the Russian Navy's newest capital ships. Moscow's decision to send them to Venezuela implies that both warships can show their flags and defend them.

Military analysts often stress that the Russian Navy is vastly outnumbered by the U.S. Navy and those of NATO countries, and that Russian warships would be unable to score any impressive results.

Although the U.S. Navy is a powerful fighting force, it cannot be strong everywhere. The arrival of two capital Russian warships in the Caribbean Sea, traditionally a U.S. sphere of influence, will be a nasty surprise to Washington, compelling it to devote more attention to regional defenses.

Both warships can support each other and have the capability to inflict major losses on any adversary before they are outgunned.

The Russian squadron's objectives, rather than its capabilities, are a high-priority issue. The Kremlin has recently used the Navy during the peace enforcement operation in Georgia and now wants to display its naval might at America's doorstep.

Nevertheless, the Russian Navy's state will not improve as a result of Moscow's modified policies. Hopefully, the government will soon start restoring and rearming the Navy because any show of strength will otherwise prove ineffective.