Building a bridge founded on commerce 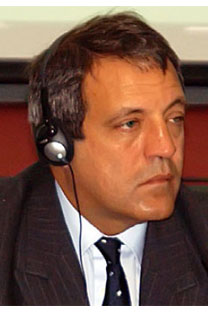 How could you rate the present situation and perspectives of bilateral relations?

RBCC has been the bridge between British and Russian business for 92 years. We work both on helping British companies to find their place in the Russian market and for Russian companies to do business in the UK. The Chamber's main focus - as our name suggests - is on business bilateral relations, although clearly many of our member companies have wider international interests. Despite political and diplomatic problems between our two countries in recent years, business relations between Britain and Russia have never been better, and the prospect continues to look promising. The message, which has been coming from both governments, is that it is very important to maintain good business links, and the RBCC is very well placed to do this

What areas of business relations seem to have the most potential?

For British companies going to Russia, financial and legal services are particularly strong; many Russian companies are happy for agreements to be underpinned by English law. Retail is a very strong area for British firms in Russia, too. As for Russian companies coming to the UK, it is expected that, following a lull in listings on the London Stock Exchange, there will be a further increase in IPOs when markets become more favourable.

The popular view is that business in Russia is at least strange and really quite tough due to bureaucracy and an unclear legal system. What would you highlight as some of the "common difficulties" to setting up and developing business processes in Russia for British companies? What about Russian companies in the UK?

Without a doubt, the single biggest complaint made by British firms setting up in Russia is bureaucracy. Even those who have been doing business in Russia for many years (and indeed our Russian members) say that there has been little improvement in recent years.

The uncertainties of the legal system and the perception that for large business the state apparatus can be used to further purely internal business battles is particularly worrying.

That said, particularly away from the natural resource sector, those who persevere agree that, as long as the due diligence is thorough, preparations are systematic and a long-term view taken, the pain of the bureaucracy and concerns about corruption are worth the effort.

For Russian companies coming to the UK, the biggest problems tend to be either less enthusiasm for their IPOs than they had hoped for or, in the retail sector for example, greater competition than they expected.

How would you describe the business environment in Russia at the present time? How may it be compared with the UK?

Although the business environment in Russia has made huge strides since the turn of the century, it still has some way to go to catch up with highly developed economies. For example, the GDP of the City of London is bigger than that of the whole Russian Federation.

But if the pace of change in Russia is maintained the gap will narrow fast. It is helpful that, so far, Russia has been less affected by the worldwide financial crisis, which is being felt by the UK in particular.

As a matter of fact, on the eve of this crisis some British investors are choosing Russia in preference to other, currently less stable markets.

The UK is considered to be one of Russia's leading foreign investors. What is Russia's attractiveness for British businessmen?

The Russian economy has developed enormously in the last 10 years. British investors were originally attracted by the opportunities in natural resources.

Companies now see that Russia has great potential for further expansion and excellent rewards in other sectors.

Increasingly attention is focused on agriculture; the provision of services; the opportunities in the regions and the sharp rise in consumers' discretionary spending power.

The London stock market is well known to Russian companies who have recently been very active abroad. What would you say about the Russian stock market and other financial institutions?

There has been much talk in recent months of Russia - Moscow - becoming a new world international finance centre. But, to be honest, I believe it will be some years before Moscow can really compete with London, New York or Tokyo.

At a more basic level, the Russian financial institutions have to become more effective in recycling and encouraging domestic saving.

There is a need for a deep and transparent debt market for smaller companies and individual consumers.

In 2007 there were a lot of rumours about the deteriorating situation in Russo-British relations. This year again we have seen a wave of pessimistic talk about the business environment in Russia due to the Georgia conflict. Should all these political issues influence business relations from your point of view?

Businessmen cannot ignore the political situation. There is no doubt that recent political developments have raised the perceived political risk of doing business in Russia. That has an economic cost in deterring or deferring investment decisions and raising the cost of capital.

However, most businessmen do not toe a political line; they see business as the way in which, even at times of political tension, a vital dialogue can be maintained and profits made.

The vast majority of our members - and the Chamber itself - take this view.

There are a lot of differences between Russian and British systems of professional education. It is still quite difficult to talk about expanding business ties without building a professional staff base. How do British companies solve this problem? Does your Chamber play any role in the process?

Many British companies continue to be impressed by the general level of education of their Russian staff, but at the same time there is still a shortage of professionally trained staff. Those that have MBAs from recognised Western institutions are in great demand, and there is not yet a Russian equivalent.

For now British companies have to bring in some staff from abroad; but I remain convinced that this is an area where there will be significant improvements in the coming years.

Some significant educational establishments, such as Britain's Open University, are members of the RBCC, and we help them to foster relations with Russian institutions.

What is the main purpose of RussiaTALK? What results do you expect from the forum?

RBCC organises two major forums a year, one in London and one in Moscow (RussiaTALK) where senior business leaders get together to discuss the current state of the Russian economy, the state of business relations between our countries and the prospects for the future.

I expect open and frank discussion of the current situation, including the latest political developments, and an honest assessment of how business can play a crucial role in maintaining and developing contacts between Russia and the UK.
For more information visit www.rbcc.com

Mr. Eggar is President of the RBCC. He is Chairman of Nitol Solar limited and of Indago Petroleum plc. He was Chairman of Harrison Lovegrove&Co. Ltd, and Vice Chairman of ABN AMRO Corporate Finance. From 1979 to 1997 Mr.Eggar was a UK MP and a Minister from 1985 to 1996. Mr. Eggar holds a law degree from Magdalene College, Cambridge, and is a barrister

British investors are keeping the faith with Russia

Economic co-operation between Russia and the UK continues to thrive and consistently demonstrates resilience with regards to the complex political environment in bilateral relations. There are more than 1,000 UK companies operating in Russia today.

Bilateral trade volume has continued to rise at record levels in recent years and its volume more than doubled in five years since 2003. In 2007 alone it grew almost one fifth to reach $16.6bn.

The UK also remained the number one investor in Russia. The current British investment to Russia grew in 2007 almost four times of that in 2006 to reach $26.3bn.

The accumulated British investments in the Russian economy as of January 1, 2008, stood at $29.3bn or 13.3pc of the total accumulated foreign investment. Russian retail, manufacturing and metallurgical industries, mining, transport and communications, property, all benefit from the British capital.

An increasing bilateral inter-action in the financial services' sphere is giving a vital and timely impetus to the economic ties between our countries contributing to their importance in the global financial markets.

All the three leading UK banks - HSBC, Royal Bank of Scotland and Barclays - followed British businesses into Russia last year and are currently building a network of corporate and prospective retail operations. In addition to the VTB and Vnesheconombank that have well-established presence in London, the number of the leading Russian financial companies that are licensed to operate on the UK stock market is already approaching a dozen.

Last year also proved breath-taking 2007 for Russian companies raising capital at the London Stock Exchange. Today there are more than 55 Russian companies both listed or trading their securities at the LSE, of which 14 joined the LSE last year and raised altogether $18.2bn - more than half of all the money raised by the Russian businesses at the stock exchanges in 2007

The volume of trading of the Russian securities at the LSE jumped by 50pc and exceeded $360bn in 2007. The three Russian companies that have raised capital at the LSE in spring 2008 are among the harbingers of the confidence returning to the markets.

As it was pointed several times by the Russian Ambassador to the UK, Yury Fedotov, the bilateral business ties continue to serve as a cornerstone of a wider Russo-British co-operation, which benefit both nations.