Perils in the security game 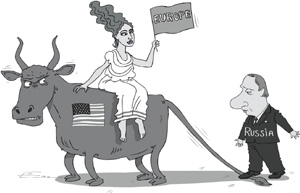 This primarily applies to two fundamental principles of international relations - territorial integrity of states and the right of nations to self-determination. Both Yugoslavia and Georgia graphically illustrated the acute contradiction between these two principles, which were laid into the foundation of the general European security system during its creation in Helsinki in the 1970s.

Today, the right of nations to self-determination is universally recognised, but there is no agreement on whether this right allows nations to secede and form new independent states. There is no doubt that this can be done peacefully, through negotiations between the central government and the ethnic minority. The main question is whether military force can be used to achieve it, and whether third countries are allowed to render military and other aid to one of the sides in an armed conflict.

In Yugoslavia, Nato gave priority to the right of nations to self-determination. As a result, Yugoslavia was divided, and Serbia lost Kosovo. In this situation, Russia emphasised territorial integrity, and insisted on looking for a peaceful solution to this problem, all the more so as there were successful examples, such as the Czech Republic and Slovakia, and former Soviet republics.

In the recent conflict between Georgia and South Ossetia, Russia gave primacy to the right of nations to self-determination. Moscow's decision as regards Abkhazians and South Ossetians is well-grounded. It is based on the Kosovo precedent. However, the US-led Western countries defended Georgia's territorial integrity. They stressed that Kosovo and South Ossetia are different cases. In reality, the only difference is that the West disliked former Yugoslavian President Slobodan Milosevic and likes current Georgian President Mikheil Saakashvili. However, the European security system cannot rest on likes and dislikes. Any country, Russia for instance, may have totally different preferences.

As a result of the recent conflict, Russia on the one hand, and the United States and some of its allies on the other, have entered a period of such acute confrontation and tensions, the like of which they had not experienced since 1979, when the Soviet Union sent troops to Afghanistan. Nato's plans of eastward expansion may make this confrontation even more dangerous.

To prevent confrontation and new rounds of the arms race, Russia insists on rebuilding the European security system, which covers the US and Canada.

This new system should clearly state in which cases the right of nations to self-determination should be satisfied, and which international mechanisms should be used to assess a specific situation and guarantee non-use of armed force. Countries should agree on how to conduct peacemaking operations, when peace enforcement is allowed and how; which organisations apart from the UN Security Council will be authorised to make such decisions in the context of the European security system. They should also be clear on the role and principles of cooperation between such international organisations as Nato, the EU, the CIS, and the Collective Security Treaty Organisation. A lot of work lies ahead and, as the current crisis shows, it must be done quickly.

The Russian President has already said that Russia is no longer going to accept double standards in the policy of the US, Nato and, to some extent, the EU. It will no longer settle for the quod licet Jovi, non licet bovi principle. Now the rules of the game should be the same for both Russia and the West. The only alternative to this approach is ultimate fighting, which will damage all countries, including the biggest and the strongest powers. It depends primarily on the US and its allies to what extent the new rules will rely on cooperation or allow rivalry. What is allowed for them will be allowed for Russia. If the US navy has the right to stay in the Black Sea, the Russian navy will have the right to be in the Caribbean. If the US recruits allies and builds military bases near Russia, Russia will have the right to do the same in Europe, Asia, and Latin America.

Whether this is worth doing considering Russia's strategic interests and available resources is another matter. But it will be decided in Moscow rather than in Washington or Brussels.

There should be uniform rules of international conduct for all leading powers. Russia has set itself ambitious economic goals, and it wants these rules to rest on cooperation as much as possible rather than on rivalry and admissibility of the unilateral use of armed force. No doubt, the same is true of the long-term interests of the US and other Western countries, despite the political frenzy of the final stage of the presidential election race.


Alexei Arbatov is an associate member of the Russian Academy of Sciences and a member of the Scientific Council of the Moscow Carnegie Centre.