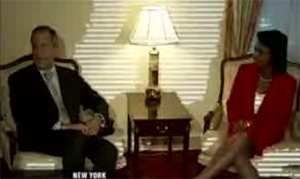 This was their first high-level tête-à-tête since the war in the Caucasus region. Journalists were not allowed to be present at the meeting. The media could only attend a so-called photo opportunity that had a touch of humor because of Rice saying to Lavrov 'Let's just shake hands and hope they'll go away', and her Russian colleague replied 'Do you think this would satisfy them?'

Traditionally, the talks between Rice and Lavrov are held at the Waldorf Astoria hotel in New York. And, although the setting will be informal, the pair is known to get straight down to business.

The U.S. side has expressed their criticism of Russian actions in South Ossetia specifically and of modern Russian politics in general.

"The legitimate goal of rebuilding the Russian state has taken a dark turn. With the rollback of personal freedoms and the paranoid aggressive impulses," Rice said when speaking at the German Marshall Fund.

In his speech to the General Assembly on, U.S. president George Bush accused Russia of violating the UN charter:

"We must stay united in our support for the people of Georgia. The United Nation's charter sets forth the equal rights of nations large and small. The Russian invasion of Georgia was a violation of those words," Bush said.

The U.S. has announced a one billion dollar support package for Georgia.

The Russian side, on the other hand, has been resentful of being turned into an international scapegoat. Russian diplomats have pointed out time and time again that the blame in the situation surrounding South Ossetia cannot be unilateral.

"They blame only us, as if these same principles do not require Georgian leaders to immediately withdraw their troops to their original positions," said Lavrov on August 20.

In the aftermath of the conflict, the Russian Foreign Ministry has focused on U.S. misrepresentations. According to the Ministry, the U.S. has failed to acknowledge Georgian aggression against Russian citizens in South Ossetia.

In a statement issued after Rice's speech at the German Marshall fund, the Russian foreign ministry pointed out that the U.S. falsely in describing the conflict as "not much of a surprise taking into consideration Washington's strong support of the failed Tbilisi regime."

Throughout the events in the Caucasus, Rice and Lavrov were both caught up in kiss and tell politics at the emergency session of the UN Security Council during the conflict.

The U.S. ambassador quoted a private conversation between the pair where he claimed Lavrov had said Georgian President Mikhail Saakashvili "Must go". But when asked whether Russia was pushing for a regime change, Russian ambassador Vitaly Churkin condemned the reference to the confidential phone call.

Some say that the South Ossetian conflict just added oil to an already burning fire. U.S. plans to deploy an anti-missile defense shield in Eastern Europe and its ongoing support of NATO expansion along the Russian border has also added to growing tensions.

No reasons for sanctions against Iran

Following his meeting with Rice, Lavrov stated that no sanctions are needed against Iran.

"We believe that the current status of the question of the Iranian nuclear programme does not require any extraordinary measures to be taken or the agreements on other meetings to be cancelled," he said.

"We're closely watching the Iranian [nuclear] programme. Clarifying any remaining questions regarding this programme is the IAEA's responsibility. The IAEA continues its work and the Iranian side continues to cooperate, we don't observe any crisis in this negotiation process. So we'll come together soon, we'll listen to IAEA and its assessments. It's a professional body that gives objective picture on various situations in this case on Iran," Lavrov added.