Today's woman who needs to be heard 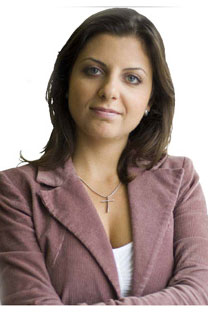 The Russian government has been investing considerable sums of money into its international image over the last several years. One of the most notable, and controversial, projects born out of this drive has been Russia Today TV, a 24-hour English-language channel broadcasting Russia's view on world events to 158 million viewers on six continents.
Today, the glitzy interior of the building where Russia Today is based, near Gorky Park in central Moscow, is vibrant with young journalists from all corners of the globe. "That has been our greatest accomplishment," says Margarita Simonyan, the channel's editor in chief. "Our team is multicultural and multinational; each member has his or her own understanding of how the channel should present world events. It's from this team that we derive our editorial positions. It hasn't been easy, but I strongly believe that argument brings us closer to truth."

It has been in matters of truth, however, that Russia Today has faced considerable criticism. Peter Finn, the Washington Post's Moscow correspondent, has referred to the channel as a "breathless cheerleader" for the Kremlin, carefully skirting topics deemed too critical of former President Vladimir Putin. During the conflict in South Ossetia, one of Russia Today's foreign journalists resigned, claiming that his reports were being censored to meet the official line. Even longtime Kremlin adviser Vyacheslav Nikonov at first referred to Russia Today as "too amateurish".

However, Chris Weafer, chief strategist at Uralsib Bank, is impressed by the channel's progress: "Russia Today has gone from appearing like a student-run station just two years ago to the professional news broadcast we have today. I find myself watching their programmes more and more often, and recommend the channel as a source of news about the Russian market to my business associates."

Simonyan has repeatedly defended the editorial integrity of Russia Today. The channel's foreign language correspondents have also maintained that they were under no more pressure in Russia than they had been during their previous work in Britain or elsewhere.

"Our goal is to bring objective information about Russia to those who are interested but don't speak Russian and, subsequently, don't have access to alternative sources of news about our country," insists Simonyan.

"I wouldn't refer to all Western media as being completely identical, but it's obvious that many English-language media outlets, including influential ones, emphasise the negative characteristics of Russia. They portray it as a dangerous country, and that is unfair," says Simonyan: "Given this situation, our vision is based on the idea that there is an enormous audience of viewers who are not satisfied with how English-language media presents the news, who want new themes, stories and approaches."

Weafer agrees that Russia Today has an important role to play: "There's a lot of cynicism and skepticism regarding Russia in the West. It's a very `show me the money' attitude. People don't realise the country is still searching for its identity."

Not everyone is convinced, however, that Russia Today is really improving the country's image abroad. Alexander Grigoriev, editor-in-chief of the Russian-language Washington Profile Information Agency, believes the problem is more complicated: "Russians currently lack an identity. They're not sure of their role in the world, who they are and who to consider their `friends'. They lack the ideology the USSR had to present to the world. On a number of issues, the country simply doesn't have a position. In many cases, Russia Today is put in the ridiculous role of expressing a point of view that doesn't exist."

In Grigoriev's opinion, this is affecting the channel's content: "Instead of saying: `Look at our interesting country! Check out our natural wonders!' - like many similar projects try to do - Russia Today takes a more authoritative tone, pronouncing: `We are a great power! We gave the world Dostoevsky and Sputnik!' It's eerily reminiscent of Soviet propaganda, and the presence of foreign journalists makes the entire presentation look fake."

By Simonyan's own reckoning, Russia Today could not exist without state support, which brings its motto - Information only. No labels attached - into question. However, the truth most TV channels don't like to tell you, she claims, is that almost no 24-hour TV news channel in the world is completely self-financing today. Some, like France 24 and Deutsche Welle, are completely on their states' payroll, which doesn't diminish their professional integrity. For that reason, Simonyan is certain that Russia Today is no better or worse than the competition.

Simonyan also says she's proud that more than 50 of the channel's young journalists have gone on to similar positions in large Western media outlets, having made much of their early career at Russia Today.

Ther have been other positive signs: In August 2007, Russia Today made television's first-ever live report from the North Pole aboard a Russian research expedition. Its 2007 New Year's Eve broadcasts from Moscow and St Petersburg were displayed live to thousands of celebrating viewers on Times Square in New York.

Weafer believes Russia Today is on the right track: "They're catching on to the fact that they must present the country to the world and invite foreigners to discover Russia, not simply declare that they are the best."

The channel has received several international media awards for coverage of ethnic and environmental issues, including one for its report on the anniversary of the Chernobyl disaster.

"Many media outlets that have existed for much longer than us cannot present such an impressive tapestry of professional awards and recognition," adds Simonyan.

In June 2007, Russia Today became the first Russian TV network to open its own channel on YouTube, attracting more than over 10 million viewers.

Weafer is optimistic about the channel's future. "The recent events in Georgia provided Russia Today with a good opportunity to show itself to the world. Of course, it has not yet attained the same level of credibility as Al Jazeera or the BBC, but more Americans are watching it everyday, if only to get some local flavour. The channel is now in position to attract an audience beyond its core group of Russia-watchers, and could be ranked alongside the major networks within four to five years," he adds.

Simonyan, for her part, sees the future as "brighter than ever". She adds: "We launched our Arabic-language channel, Rusiya Al-Yaum, in May 2007. Both projects provide me with so much work that I can't possibly consider future employment elsewhere, at least for now."

In 2005, the Kremlin chose 25-year-old Margarita Simonyan as Russia Today's editor in chief. This may be unthinkable in the West, but it's not surprising in Russia, where it's common to meet a multimillionaire who is still far from celebrating her 30th birthday. Simonyan shrugs off questions about how she got the job, insisting they be addressed to RIA Novosti, the state media organisation backing Russia Today: "Maybe they wanted someone without experience in the Soviet school of journalism, maybe they just wanted a young team."

Born in 1980 in Russia's southern city of Krasnodar, Simonyan remembers the moment she got interested in journalism: "I learnt to read at a young age, and my parents used to show me off to their friends. Once we went to my grandparents' house and they asked me to read from a newspaper. Impressed, my grandfather exclaimed, `you're going to be a journalist!' Maybe the word just got stuck in my head."

Following an exchange year in the US, Simonyan acquired fame as a young journalist for a local TV channel in her home city. She covered the Second Chechen War and was in Russia's south when floods wiped out many homes and villages. For her work, she received an award for "professional courage". In 2002, she became a regional correspondent for Russia's national RTR TV channel, and went on to cover the Beslan school siege.
Facts and views
Debut
2005

Since its inception in 2005, Russia Today has evoked various emotions from viewers and critics on both sides of the Atlantic. The channel can boast of some impressive figures during its brief existence [see below], and most watchers seem to agree that its content and approach are gradually becoming more professional. In addition to news, Russia Today offers several regular programmes. These include:

In Context
Led by chief political commentator Peter Lavelle, the show appears every Sunday and covers various hot topics "from the Russian perspective".

Technology Update
The show seeks to "showcase the innovation and ingenuity that drive Russia in the 21st century". It covers the [sometimes rather bizzare] trends of Russia's hi-tec potential.

Moscow Out
RT's correspondent Ekaterina Gracheva takes you on a journey to a Moscow you've never seen, uncovering its hidden thrills and wonders.


Where to watch
On television
The channel is available on the main satellite platforms, including Sky (UK), Canalsat (France), Viasat (Northern Europe), as well as on cable networks in practically every country of Europe.

On the Web
Russia Today was the first Russian TV network to open its own channel on YouTube: https://www.youtube.com/profile?user=RussiaToday. The website features breaking news, as well as the channel's regular programmes. A live stream is available via http://streaming.visionip.tv/Russia_Today and via http://www.livestation.com.

10m people have watched Russia Today's channel on YouTube since August 2007, when it became the first Russian network to launch such a project.

252,170 - RussiaToday.com's monthly traffic, significantly ahead of BBCWorld.com (59,016), according to Quantcast

`In the spirit of great marketing, the Kremlin is using charm, good photography and sex appeal to appeal to a diverse, skeptical audience. The result is entertaining - and ineffably Russian.'
Heidi Brown, Forbes Magazine

`As water cannon struck anti-government demonstrators in Tbilisi, the Russia Today correspondent Katerina Azarova was reporting so close to the protests that she was poisoned by tear gas. Watching the channel's round-the-clock coverage of the unrest in Tbilisi felt like peeking into a foreign newscast - without needing to know a foreign language.'
Stephen Hayman, New York Times