Reaching for the skies with history 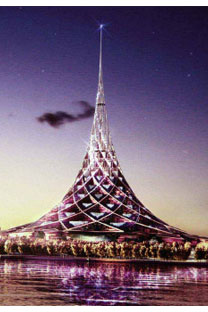 Perhaps one of Communism's greatest remaining legacies is its architecture: faceless concrete slabs still dominate the skylines of many cities from North Korea to the Czech Republic. In many countries, modern glass skyscrapers are gradually replacing these faceless facades. This transition has also taken off in Russia, but not without controversy.

To say that all Communist architecture as monotonous and unsightly would be grossly incorrect. Early constructivism - which thrived in the period immediately following the 1917 revolution and until the early 1930s - left an undeniable mark on the global scene, resulting in such striking buildings Erich Mendelsohn's Red Banner Textile Factory in St Petersburg (1926) and Johannes Brinkman's Van Nelle Factory in Rotterdam (1930).

The movement combined advanced engineering technology with a devout social purpose, only to be scrapped in favour of "Stalinist architecture" (or "Socialist Classicism") in the 1930s. Stalin's plans abandoned advanced technologies in favour of labour-intensive construction, basic building materials and imposing exteriors.

In Moscow, the best examples include the "Seven Sisters", the Moskva Hotel and the Moscow Canal's Northern Terminal.

However, better technologies and a massive housing shortage spelled the end of Stalinist architecture, and, following Khruschev's 1955 order to abandon the "excesses" of the past, the modern concrete slabs commonly associated with Communism blossomed. Over the following decades, access to housing improved greatly in the Soviet Union, but architectural eyesores began to dominate the skylines of many cities.

It is these buildings ("Khruschevkas") that remain as unsightly monuments to the massive construction effort of the latter half of the 20th century. Moscow's mayor has repeatedly promised to tear them down, but no single idea of what 21st-century Moscow - or many other Russian city - should look like has yet been agreed.

Following the 1990s slump, a nationwide construction boom has seen modern glass buildings blossom in cities from Irkutsk to Rostov.

The rise of the modern skyscraper in Russia began with the inception of the Moscow City International Business Centre in 1992. Today, its buildings are rapidly becoming part of city's skyline [see cover]. A centrepiece, Russia Tower, will reach 2,009 feet into the sky when finished in 2012, making it the third tallest building in the world and the tallest with a natural ventilation system.

Also planned is a $400m, 60-floor rotating skyscraper by Italian architect David Fisher. The floors of the building will revolve around a central spire, causing it to change shape. "The building will produce its own energy [harnessing wind and solar power], and will therefore be entirely ecological," Fisher told Russia Today television. He's proud that assembly of the building's components away from the construction site will mean a much faster building process, expected to take less than two years. The building will be unique outside of Dubai, where a similar project is underway.

British architect Sir Norman Foster recently designed a building to replace the dreary 1970s Central House of Artists. Called Apelsin (Orange), the building resembles an orange being sliced into pieces. Foster has also designed Crystal Island, a massive $4bn multi-purpose structure that is to be weaved into a new park. At 1,300 feet tall, the building will provide around 27 million square feet of floor space, making it possibly the largest on earth. The tent-like structure will be covered in a thermal "second skin", which will be opened in summer to allow the building to "breathe".

The skyscraper craze has not been confined to Moscow: Dutch architect Erick van Egeraat has been commissioned to develop a new master plan for the Siberian city of Khanty Mansiisk.

Central to the plan will be the construction of a 918-foot "Green tower", designed by Foster. The tower is to be adapted for harsh Siberian living conditions, with a glass cover to take advantage of daylight. A south-facing atrium will exploit solar gain and provide insulation during winter.

Major business districts are also planned for St Petersburg - featuring the controversial 1,300-foot Gazprom skyscraper - and the Urals city of Yekaterinburg, where the ultramodern, 20-storey Hyatt Hotel is nearing completion.

Central to almost all of these projects is the idea of ecological friendliness: the structures are designed to make the most of available resources, integrating wind turbines and solar panels.

However, there is a dark side to the story. "The big problem is that most city governments accept a false dichotomy: either cities have to move and people have to live in bad housing, or they have to be turned into museums," explains Edmund Harris of the Moscow Architectural Preservation Society.

"This is a disingenuous approach. There's no reason why the construction of new facilities should preclude the preservation of historic buildings. They can, and should, be part of a living city, as world experience has shown. The `museums' approach is very Soviet."

The problem is particularly acute in Moscow, where many locals lament the city's changing facades. "There is no grand plan for Moscow like in Stalin's time. New buildings spring up overnight, and they don't blend in at all with the city's architecture," reminisces Nikolai Korolyoff, lifetime Moscow resident.

In Moscow, much of the construction appears to be fuelled by demand: a lack of office and living space has made the city's property prices among the highest on earth. Moscow's swelling population has also brought the city's traffic to a near-halt, raising the need for multi-functional complexes.

However, rising incomes and higher standards of living may one day better enshrine aesthetic considerations into law. "Until recently, legislation made burning a historical building down convenient because the owner was under no obligation to repair it," explains Harris. "This has now changed. On Taganskaya street [in the centre], the owner of a 19th-century mansion recently hacked off a pediment and added an ugly metal structure. A court confiscated the mansion and the pediment is supposed to be restored, although it's unclear who will pay."

The wave of foreign architects coming to Russia is also partly fuelled by the country's lack of professionals. "I think the situation is getting better," says Harris. "In the 1990s, you couldn't talk about any architectural schools or serious Russian projects. Now Russian architecture is at a crossroads: either to catch up with world trends, or create its own designs. The result will be very interesting to watch."