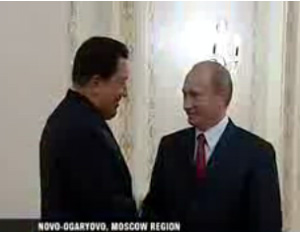 After talks with the Prime Minister in Moscow, Hugo Chavez is in the city of Orenburg to meet President Dmitry Medvedev.

According to sources in the Kremlin, Russia is ready to grant Chavez one billion dollar loan to buy weapons.

The visit of the Venezuelan President comes in the framework of his international tour. He has already travelled to Cuba and China.

His visit to Russia is quite a hasty one, with only several hours spent in Moscow and some more in Orenburg. But despite lack of time - on Friday Chavez is due to head for France to meet Nicolas Sarkozy - the Venezuelan President will attend military exercises after talks with Dmitry Medvedev.

On Thursday, Chavez discussed with Prime Minister Vladimir Putin the possibility of a nuclear energy deal. Russia says it is ready to consider this issue.

Despite the serious topic for discussion, there was room for some light moments. After the talks, Hugo Chavez passed Vladimir Putin greetings from Fidel Castro and also thanked Vladimir Putin for a warm welcome - literally. Chavez said he was glad his visit to Moscow did not fall on the cold Russian winter.

Relations between the countries are at their best for years, with Moscow recently sending warships to South America to take part in joint military exercises with Venezuela. The Venezuelan leader's invitation to host both Russian bombers and the Russian Navy came a month after the U.S. ordered its warships to enter the Black Sea.

Moscow and Caracas say they had an earlier agreement to conduct military exercises and deny any connection between the presence of the U.S. Navy near Russian borders and the Russian fleet heading to America's backyard.

The nuclear-powered Peter the Great cruiser, an anti-submarine ship and 2 support vessels are now preparing to cross the Atlantic, but Russian Navy officials say the trip has no political implications.

"We are not going to demonstrate any aggressive intentions. The fleet has always been and will remain a deterrent," insists Russian Navy spokesperson Igor Dygalo.

The ships started off just days after two Russian TU-160 strategic long-range bombers, carrying no nuclear weapons, returned to their home base in Russia after a week of maneuvers in Venezuela. Hugo Chavez said he was satisfied with the flight.

"Russian planes flew across the Atlantic and Caribbean. I do not know when they will return, but any time they want to return - they can do that. Venezuela is their home. Russia plays a role of a true friend and ally," said Venezuelan president.

To read more about Russia's Navy in Venezuela, please follow the link

During his current visit, Hugo Chavez is discussing energy, scientific and technological cooperation.

Previous such meetings have already brought tangible results and today leading Russian companies are now building their presence in the Venezuelan market.

In turn, Venezuela has already purchased billions of dollars worth of arms from Russia, including military helicopters and Kalashnikov rifles.