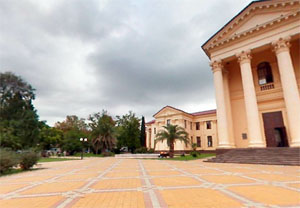 The construction of the Olympic venues is expected to be completed by the end of 2012, enabling assessment during smaller sporting events prior to the Winter Olympics.

Following the decision to hold the 2014 Winter Olympic Games at the Russian Black Sea resort city, large parts of it have turned into a giant construction site.

Organisers say construction of most Olympic venues will have commenced by the start of next year. Although visitors can't yet see new stadiums and ski runs, the city itself is changing rapidly. Anyone who knew Sochi before 2007 would struggle to recognise the city now.

Over $12 Billion will be spent to get the Black Sea resort geared up for the Winter Games - that's about eight times what Canada's Vancouver will outlay for its upcoming 2010 Olympics.

The IOC will get unprecedented progress monitoring access to all Sochi Olympic projects online, on an almost real-time basis. Russia's Prime Minister Vladimir Putin assured the IOC that its members will be able to monitor developments using the latest information technology.

"We've developed special software for tracking each object's progress. It will also integrate all work done on the project. Thus, we and the International Olympic Committee, and you, as its representative, will get a non-stop, daily - and even hourly - control over everything happening as part of the project - and of the individual projects as well," Putin said.

The IOC plans to work closely with organisers. Its members say every day is now a deadline.

For decades Sochi has been a favorite holiday destination for millions of tourists. The city's Mayor, Vladimir Afanasenkov, says Olympics won't change that because of the building activity.

The plan is for most of the Olympic venues to be built in the Imereti valley and higher in the mountains - in Krasnaya Polyana, far away from Sochi's densely populated city centre, as well as from the popular Black Sea beaches.

The authorities say protecting the environment is their prime concern. Several environmental groups have held protests against the construction of a bobsleigh track near the Caucasus nature reserve. IOC member and former ski legend Jean-Claude Killy confessed he was amazed at the decision to alter plans due to environmental concerns.

"When you decided to change the scheme due to environmental concerns and moved the freestyle track down to the lowland - I must admit, that was the most unique and amazing thing we've ever seen at the Winter Olympics."