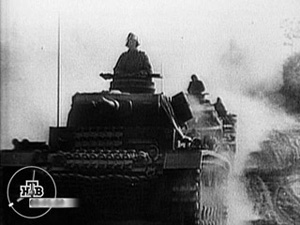 The Russian Foreign Intelligence Service (SVR in Russian abbreviation) has declassified archive materials related to the 1938 Munich Agreement, which triggered the most dramatic events of the 20th century.

Head of the SVR press office Sergei Ivanov allowed Yarmolenko to familiarize himself with the declassified documents.

"The declassified intelligence documents reflect the political processes which took place before and after the Munich Agreement of September 30, 1938, which is also called the 'Munich conspiracy,'" Ivanov explained.

These documents were kept in the archives as top secret for 70 years. They show that the Soviet political leadership was informed about the preparations for the meeting of Neville Chamberlain and Eduard Daladier, on the one hand, and Adolf Hitler and Benito Mussolini, on the other, and predict its potential military and political consequences for Europe. The papers show what unprecedented pressure Britain and France brought to bear on Czechoslovakia, demanding that it ceded Sudeten to Germany.

"Moscow was receiving secret reports to the effect that the British and French ambassadors in Prague were persuading the Czechoslovak president to give over the Sudeten region to the Germans. Moreover, Prague was offered to cancel mutual assistance pacts with other countries," Ivanov said.

Memo #8604, which was sent to Moscow by Russian intelligence from Prague several days before the signing of the Munich Agreement reads: "On September 19, British Ambassador Newton and French Ambassador De Lacroix conveyed to Milan Hodza (Czechoslovak prime minister in 1935-1938) the following on behalf of Chamberlain and Daladier, respectfully:

"Guided by the lofty principles of preserving peace in Europe, they consider it necessary for Germany to incorporate the Sudeten region. A system of mutual aid pacts with other countries should be cancelled. Instead, all of Czechoslovakia's neighbors, plus France and Britain will guarantee the inviolability of its frontiers."

These actions destroyed the existing elements of the collective resistance system. The Western policymakers did this behind the back of the Soviet Union, which had mutual aid agreements with Czechoslovakia and France.

The 1938 declassified documents also reveal the details of the correspondence between European embassies and their foreign policy departments.

For example, the British ambassador in Warsaw warned the Foreign Office that if Germany invaded Czechoslovakia, the Polish leadership would seize the Tesin region, and that is what exactly happened. Having enlisted Germany's support, Poland took part in dismembering Czechoslovakia. Later, Poland also fell victim to Germany.

The Finnish ambassador in London reported that if Hitler moved his troops to Czechoslovakia, France would not be able to render it effective military aid.

"The Soviet Union was ready to render such support to Czechoslovakia, but because of the heavy pressure from London and Paris, Prague did not dare address Moscow with such a request," Ivanov recalled.

Soviet intelligence sources reported that many capitals closely watched the geopolitical situation in Europe after the conclusion of the Munich Agreement as well.

"As early as November 1938, diplomatic missions of a number of countries reported to their departments that Britain and France would not prevent Germany's eastward expansion," Ivanov said.

SVR veteran, Maj.-Gen. Lev Sotskov (Ret.), who sorted the archive documents, is confident that the Munich Agreement eventually destroyed the collective security system in Europe and led to the outbreak of WWII.

Sotskov served in the Foreign Intelligence Service since 1956 both abroad and in the central office. Now he is studying the archives on the history of intelligence. He wrote "Operation Tarantella" and "Unknown Separatism," and took part in the compilation of a collection of documents, entitled "Baltic Countries and Geopolitics."

Sotskov believes that the declassified documents make it possible to take a new and deeper look at the role the world leaders played in the late 1930s in Europe.

"The documents received after the Munich conspiracy are particularly valuable. They analyze the post-Munich situation in Europe and clearly show that Britain was trying to draw Germany and the Soviet Union into active hostilities," Sotskov emphasized in an interview with RIA Novosti.

In a memo on December 21, 1938, Lavrenty Beria reported to Stalin about the Soviet-seized documents, which included reports of Finnish envoys to London, Paris, and Warsaw on Germany's eastward expansion, and the position of the British, French, and Polish governments on this issue.

Thus, Finnish Ambassador in London Grippenberg reported to his Foreign Ministry: "I heard the opinion that German propaganda of colonies is false. As Britons put it, it is a smokescreen to cover the preparations of a plan concerning Soviet Ukraine. Hitler himself told French Ambassador Francois-Poncet that he was not even thinking about any colonies," the document reads.

Later, on November 25, Grippenberg reported his conversation with a British government member who assured him that Britain and France would not interfere in Germany's eastward expansion.

"Britain's position is as follows: let's wait until Germany and the U.S.S.R. get involved in a big conflict," the document reads.

Commenting on it, Sotskov explained that despite the circumstances, the Soviet Union was still trying to set up some system for resisting the Nazi aggression. As a result, Britain and France had to send their military missions to Moscow for negotiations.

"Moscow presented very detailed information about the resources which it could use against Hitler's Germany. In the event of an anti-Hitler agreement with Britain and France, the U.S.S.R. was ready to employ 120 infantry divisions, 16 cavalry divisions, 5,000 tanks and as many aircraft," Sotskov said.

However, despite this, the talks with Britain and France failed. It became obvious that they were working toward their super goal, he noted.

The documents make it abundantly clear that both Britain and France realized that their position was driving the U.S.S.R. into a corner and that Moscow would have to come to terms with the Germans.

As a result, the U.S.S.R. signed the Nonaggression Pact with Germany, which allowed it to move its border to the West and gain some time for the preparations to repel the aggression, Sotskov explained.

"It became obvious that a policy of appeasing Hitler did not work, and that concessions only encouraged him further. This compelled the Soviet leadership to look for ways of ensuring national security in this foreign policy environment," he pointed out.

"The Western model of appeasing the aggressor (the Munich Agreement) failed to achieve the desired effect, and the war broke out in the West. France surrendered to Hitler, and the cabinet of ministers changed in Britain. The anti-Hitler coalition took shape later under the pattern suggested by the Soviet Union in 1935: the United States, Britain, the Soviet Union, and later de Gaulle's France," Sotskov said.

He believes that Europe should draw conclusions from the events around the Munich Agreement, as well as from the events in the Balkans and the recent crisis in the Caucasus (South Ossetia).

"First of all, appeasing any aggressor, whether big or small, is a flawed policy. The United States wants to dominate the world, and it does not matter whose model, Hitler's or Bush's, it is using to achieve this goal," he said.

Unless aggressive actions are nipped in the bud, the region and probably the entire continent will be in for big trouble, Sotskov believes.

He is convinced that Europe needs a system of collective security, and this is the second lesson. "The bloc system no longer works. However, it transpires that the lesson has not been learned. Instead of curbing Georgia, the aggressor, the United States suggests encircling Russia," he summed up.