PACE rejects move to strip Russia of its powers 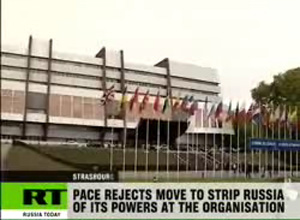 The Parliamentary Assembly of the Council of Europe has turned down a proposal to suspend Russia's voting rights in the organisation. The initiative was put forward by 24 PACE representatives who were unhappy over Russia's role in the South Ossetia conflict.

The voting went six to one in favour of Moscow.
The lawmakers have been holding urgent debates on the aftermath of the war.
The resolution also included criticism of both Russia and Georgia accusing them of violating organisation rules.
PACE delegates have encouraged continued dialogue between the two countries.