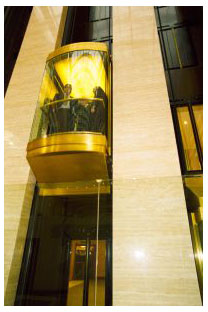 Japanese authorities are prepared to allocate $10 billion for the project. The space elevator is expected to cut the cost of delivering cargo into space and is considered one of the most ambitious projects of the 21st century. The Japanese plan to unveil a schedule for the elevator's assembly and commissioning this November.

The idea of a space elevator is over 100 years old. Russia's Konstantin Tsiolkovsky, the founder of theoretical astronautics, suggested building a tower thousands of kilometers high attached to some firmament in orbit. Steel, the most durable material of Tsiolkovsky's time, however, was not capable of bearing even a small part of the expected physical stress.

In 1960, before the first manned flight was performed by Yury Gagarin, Yury Artsutanov, a post-gradate student at the Leningrad Technology Institute, using Tsiolkovsky's ideas, suggested creating a cable-guide connecting a spot on the equator and a space platform in a geostationary orbit at 35,786 km, whose orbit would remain synchronous to that of the location on Earth. Gravity and centripetal force would keep the cable, connecting the platform to Earth, constantly taut, making transportation possible. The time required for cargo from Earth to reach the platform was estimated at one week.

Later, science fiction writer Arthur Clark wrote of a space elevator in his novel, The Fountains of Paradise, attracting attention to the concept. In 1999, NASA and its Scientific Research Institute included it in the list of probable tasks for early third millennium.

A major problem in the construction of a space elevator is to create the cable, which must be extremely durable and light-weight. The durability of carbon nanotubes, invented in 1991, exceeds the requirements for the space elevator, with a far higher tensile yield strength and density six times less than that of steel. A one millimeter diameter strand made up of nanotubes is capable of supporting up to 60 metric tons. Still, the technology for industrial production of nanotubes and the weaving of strands into a thread is in its early development.

Some scientists say the inevitable crystal-lattice defects could decrease the durability of the nanotubes. Even if flawless threads could be produced, the micrometeorites, cosmic rays, and atmospheric oxygen could still damage the cable.

Space junk and the natural vibrations of the giant "rope" could also cause the cable to fail.

Another problem is energy supply. Existing battery technology could not provide the necessary energy for the whole distance. This means that an external energy supply will be needed, possibly a laser or microwave source, which will require corresponding receivers to be installed on the elevator itself. Another option would be to use the elevator's braking energy on its way down.

Let us assume that all the problems with materials and energy are solved. The cable weighing thousands of tons has been manufactured, and needs to be placed into space. There are no carrier rockets capable of doing this, which means the cable would have to be launched into space in pieces, which need to be joined somehow afterwards. Or one could drop down a thin strand from the orbiting platform and splice it into the full diameter of the cable. Neither placement concept seems any easier to implement than creating a suitable material for the cable.

So far scientists have been experimenting in space with cable systems of up to several hundred meters long, made of materials which are far less difficult to produce than nanotubes.

In 1965, Russia's Rocket and Space Corporation Energia, then called the Central Design Bureau for Engineering, led by Academician Sergei Korolev, was preparing the first ever space experiment with a cable system. The project involved creating artificial gravity on the Soyuz spacecraft, which would be connected with the carrier rocket's final stage via a steel cable, both rotating.

After Korolev died, however, the project was cancelled. Development of cable systems was resumed at Energia 20 years later.

A series of experiments with cable systems were performed within U.S., U.S.-Italian and U.S.-Japanese programs. Although some of them failed, part of the planned research was done.

In recent years, scientists at the Space Research Institute of the Russian Academy of Sciences have been researching the possibility of setting up a group of orbital cable systems to ensure cyclic delivery of cargo from Earth to Moon. Each system will consist of two space vehicles interconnected with a cable and rotating like a slingshot, with its centre of mass moving along a predetermined orbit. If one of the two space vehicles is "unclogged," the rotational energy released will cause its translational movement, like a jet engine.

Theoretical and experimental research has shown that, to keep a transport corridor between Earth and Moon functioning, the design should include three cable systems, two in low earth orbits, low circular and elliptic, and one in a lunar orbit. Cargo would have to be transported between the three systems, eventually making their way to the final destination.

Calculations have revealed that this kind of transport system would weigh 28 times less than the cargo it would be capable of delivering from Earth to Moon, while traditional delivery by a rocket requires an amount of fuel that weighs 16 times more than the cargo itself. This concept would be much simpler and cheaper to implement than a space elevator.

Yury Zaitsev is an academic adviser at the Russian Academy of Engineering Sciences.