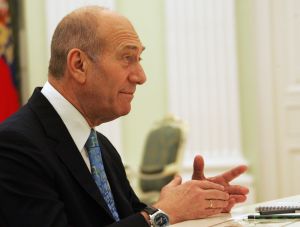 Olmert arrived on his two-day visit to Russia on Monday despite his resignation on September 21 amid corruption allegations. He has also been replaced by Foreign Minister Tzipi Livni, 50, as the leader of Israel's ruling party. The trip is likely to be his last as Israeli premier.

A source in the Kremlin said one of the main points on the agenda of Medvedev and Olmert's meeting would be a discussion of ways to boost the Israeli-Palestinian peace process.

The so-called Middle East Quartet (the U.S., Russia, the EU and the UN) recently supported a Russian proposal to hold a peace summit in Moscow in the spring of 2009.

The meeting, agreed upon in New York in late September, is to be a follow-up to last November's U.S.-sponsored meeting in Annapolis, Maryland.

Israel and the Palestinian National Authority pledged in Annapolis to resume peace talks, draft a settlement plan by late 2008 and come to terms on the form of a future independent Palestinian state. However, their talks have so far made little tangible progress.

"A great deal of attention will be paid to the necessity of improving the humanitarian situation in the Palestinian territories, above all in the Gaza Strip," the source also said.

An Israeli blockade of the Gaza Strip has been in place since the hard-line Islamic group Hamas seized control of the enclave of 1.5 million people from the pro-presidential Fatah movement last summer.

In September, Russia donated $10 million to the Palestinian territories to pay for essential services and supplies, primarily in health and education.

Olmert also intends to discuss Russia's cooperation with Iran in the nuclear sphere. Russia is currently building the Islamic Republic's first nuclear power plant in the south of Iran. Although Iran has insisted its nuclear ambitions are peaceful, Israel and its Western allies have accused it of seeking to create atomic weapons.

"We will discuss a wide range of issues, including those that cause deep concern and require immediate action," Olmert, 62, told a cabinet meeting on Sunday, referring to the Iranian "nuclear problem," in which Russia "plays a special role."

Israel's Defense Ministry has also been worried by reports of Russian plans to supply guided missile systems to Iran, the Israeli media earlier said, referring to high-ranking sources in Jerusalem.

However, on Monday, the Russian arms export monopoly Rosoboronexport said it had no information about any plans for Russian surface-to-air missile deliveries to the Middle East.

"The company has no knowledge about plans to deliver Russian SAM S-300 missile systems to Syria and Iran," a company spokesman said.

Olmert will stress to Moscow that any such deal would destroy the strategic military balance in the Middle East, the Haaretz newspaper said.

The two leaders will also discuss ways to increase economic cooperation in a wide range of spheres, from nanotechnology to natural gas. Russia-Israeli trade turnover was more than 2.5 billion in 2007.