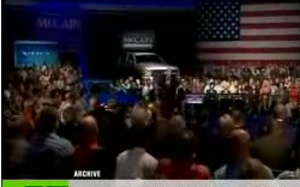 With the U.S. presidential election just over a month away, many are waiting to see if a new face in the White House will bring any changes to Washington's policy towards Moscow.

"John McCain is a person who can provide the stability and the predictability for U.S.-Russia relations. McCain recognises that the fight against terrorism is important but also he emphasizes the nature of the societies, the coalition for democracy that can be created worldwide," Cohen explains.

There is at least one thing in common between the Russian president Dmitry Medvedev and the U.S presidential candidate Barack Obama - both used to teach constitutional law. Obama's foreign policy advisor, Celeste Wallander, says that's enough to start talking.

One of the most contentious issues - the U.S. missile defence system in Europe - has also found its way on to the discussions. McCain's advisor says his candidate will stick to the initial plan but may need a helping hand of the media.

Ariel Cohen said: "Media is an important battlefield and if we give up that instrument, we'll pay a high price for that. The example of these ten missile interceptors - people don't know and don't understand these are not threatening Russia's nuclear arsenal at all."

Obama's advisor says there will be no rush in setting up interceptors and radar in Europe.

"Barack Obama has stated he will support research and development of missile defence capability as in the world we live it's a serious risk. However, he's also said the U.S. will deploy this system only once it's been tested and proven to work," Wallander said.

While the U.S.-Russian relations are now at their lowest point since the end of the Cold war, many in the business community suggest the U.S. presidential election presents the best chance of changing the political climate.

Read more on this topic:

U.S. candidates lash out at Russia

No gaffes at Biden-Palin debate