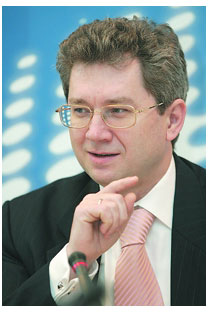 The inter-governmental commission meets every year to discuss various aspects of India and Russia's relations in the banking sector. Konstantin N. Korischenko, Bank of Russia Deputy Chairman, discusses the future of this industry and how it will flourish in the near future.

In early October, India has hosted the Days of Russian Banks. What could you say about the current Indian-Russian relations in banking? Do you think that the industry in on an upward growth?

Nowadays bilateral inter-bank ties are developing much more actively. Previously, Moscow and New Delhi focused on rupee-debt settlements and other long-term contacts at the government level. But, it has now become possible to speak about real banking contacts. Several Russian and Indian banks have already opened offices in both countries. At least 15 banks maintain correspondence relations, catering to the business community's interests on an increasingly greater scale. Such is the result of more active mutual business operations on both national markets.
In effect, this implies a more advanced model of bilateral relations, namely, direct investment, rather than just efforts to facilitate financial balance-of-payment operations. Unfortunately, bilateral stock market cooperation leaves a lot to be desired. But everything will happen in due time.
Although all processes have slowed down somewhat because of the global financial crisis, we still plan for joint work prospects, all the more so as we can learn a lot from each other.
At the same time, Russian-Indian banking and financial relations imply that the Russian economic system has been considerably stabilised and liberalised in the last few years. This also concerns the foreign currency regulation sphere. However, the Indian foreign currency regulation system is far more stringent. Consequently, state agencies are largely responsible for settling various financial issues. State intervention or assistance remains an inevitable element of financial and economic cooperation, making it possible to achieve the required results.

But India believes that excessive Russian state regulation hinders the expansion of business ties. Is it true? What are your views on the same?

Starting with 2006, Russia abolished all restrictions on business operations. Such restrictions only concern investment in strategic sectors.
As far as the Russian investment climate and the protection of investor rights are concerned, Moscow offers the greatest possible incentives. The state oversees private initiatives but does not limit them.

To what extent do the differences between the Russian and Indian banking systems influence the expansion of bilateral contacts?

It is hard to speak about any excessive differences in this respect. Naturally, the Indian economic model has evolved in line with different principles largely copying the British system.
The globalisation process brings many aspects to a common denominator in the context of specific mechanisms and the processes of legal and financial regulation. It would be incorrect to say that both systems are identical. However, this is not a major problem. We have enough world-class experts who can eventually reach consensus.
On the other hand, it should be noted that each country exists inside its own system of coordinates, abiding by specific behavioural and ethical norms. All processes will be hindered unless we learn such etiquette. This means that if Russian banks are planning to work in India or vice versa, they will have to open local offices, hire local personnel and assess the situation on the spot. This would facilitate consistent and well thought-out work.

Russian market stability, primarily the issue of loans and investors safety, is a serious problem. The media is discussing the outflow of capital and Russia's tarnished reputation among investors. How important are these issues?

Russia's financial and crediting policies have two main aspects. First, this concerns popular stereotypes of the Russian financial market. Those claiming that the Russian economy exists independently of global financial standards are making an inaccurate assumption. We are no better or no worse than any other nation.
The Russian market's current problems and some financial trends are not unique. Such problems are typical of foreign financial processes. For instance, this concerns the influence of the global financial crisis, the outflow of capital and a widely mentioned investors' distrust.
It is common knowledge that most investment processes are global in nature. The decision of investors to finance specific projects is not politically motivated, depending instead on their profitability. Project profitability depends on their value; cheap projects are a plus.
At the same time, the correlation between stock market fluctuation and other assets is the main criterion for investing or withdrawing capital.
On the one hand, the outflow of capital is predetermined by rising project costs. The global adjustment of the dollar's exchange rate is a major cause of the present-day financial crisis, which has also affected the Russian economy.
Exchange-rate fluctuations depend on rising or declining energy prices and other elements of the global payment and settlement system. This, in turn, influences capital influx and capital outflow volumes and the expansion of loans. It is pointless to invest money in areas where it won't work. Artificial support for such processes can cause even more negative results. Imagine that you have started building up a certain group of muscles in order to win a specific sports event. You will win, but your body will be hopelessly deformed, creating problems in everyday life.
Russian financiers and their foreign counterparts realise this. However, someone will always want to introduce subjective factors that have nothing to do with market laws and the disbursement of financial flow into objective processes.
In this context, the panic around the outflow of capital from Russia and the reluctance of investors to finance the Russian market is nothing but speculation, because speculative and portfolio investors are generally withdrawing from the national market. It would be incorrect to use such parameters for assessing the influx and outflow of capital. Direct investment volumes are the most adequate parameter.
It will be possible to assess the situation after analysing third quarter and subsequent data. But it appears there are no major fluctuations.
Doubtless, the latest Russian developments have sparked much speculation, including in the financial sphere. It would be misleading to say that there are no problems. However, such problems are not linked with the allegedly unique Russian economy. The facts should not be distorted for the sake of satisfying somebody's political ambitions.

However, they are now criticising specific aspects of the Russian investment climate, including the lack of long-term loans.

It is most difficult to comment on generally known trends and statements. The "long rouble" concept does not imply a rouble which is two or three times longer than usual. This means the ability of investors and project developers to agree on project deadlines and other contract terms.
Claims that Russia lacks long-term loans highlight misunderstandings between concerned partners. High credit rates, a major problem for example, depend on inflation, rather than evil intentions of the state or private individuals.
There can be no cheap funding in conditions of inflation. Potential partners find this to be an unprofitable long-term variable. Moreover, inflation makes the market utterly unpredictable, adversely affecting the financial terms of specific deals. High inflation rules out reasonable credit rates.
The Russian government and national banks are doing their best to curb inflation. The situation is more balanced today. We are still coping with the consequences of the economic mess of the 1990s. However, the gradual creation of market economic models and their assertion make it possible to tackle various problems more flexibly, ruling out tough, mandatory state control.
Although the government sets prices in some industries, such prices now correlate with market prices.
This also concerns financial mechanisms for implementing regional projects. Regional development has become a high-priority aspect of Russian economic development.
Unlike the 1990s when the regions were divided into promising and unprofitable, the situation in this respect has changed completely. Each Russian region can offer something unique to potential investors. Although the country has a joint financial system and federal legislation, many regional administrations are more actively attracting foreign investors and looking for ways to enter foreign markets.
For instance, Moscow is no longer the main player on the housing construction market, dropping to ninth place among the most attractive regions. The same can be said about other sectors. Although it would be incorrect to say that Russian regions have similar socio-economic development levels, potential investors face absolutely fantastic prospects there.
Summing up, I can say that Russia remains extremely attractive for investors. This and some other issues were discussed during the Days of Russian Banks, and now it is time to start working.