Russia-EU relations on the line? 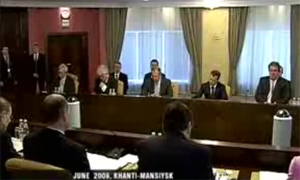 The EU-Russia Partnership agreement was signed in 1997 and expired at the end of the last year.

The talks on the updated version of the agreement were due to start this autumn but on the September 1 at an extraordinary summit of the EU leaders in Brussels it was decided to freeze the talks as a result of the brief war between Russia and Georgia.

Now the EU leaders are due to discuss the issue in Brussels. The EU continues to be divided in its stance towards Russia. France, which currently holds the EU rotating presidency, is pushing for an early relaunch of the talks on the new partnership agreement between the EU and Russia, a position backed by Germany and Italy. They say that these talks are needed. Some other EU members like the UK, Austria, Sweden and some of the countries of the former Soviet bloc say that first the EU should see how Russia will stabilise relations with Georgia.

Russia-Georgia talks, organised by the UN, the EU and OSCE are currently underway in Geneva.

Last week Russia withdrew its troops from the battle zones of the conflict region, thus meeting a major requirement for the resumption of the talks between the EU and Russia.

The French Foreign Minister, Bernard Kouchner, has said that there are no more Russian troops in Georgia, while his Italian counterpart Franco Frattini has said that Russia has shown a constructive attitude.

So far no one can tell whether the talks will resume before the Russia-EU summit due to take place on November 14 in Nice.

The high profile talks between Russia and Georgia in Geneva have been downgraded to a series of technical meetings at expert level due to the fact that Georgia is strongly opposed to the participation of Abkhazian and South Ossetian representatives in the talks. Nevertheless, the U.S. has announced that an American delegation will be attending the talks, which will maintain their credibility.

Both meetings, in Brussels and in Geneva, are extremely important for the future of the EU-Russia relations whatever decisions are taken.

Russia and EU at `crossroads'

Our partnership with EU is mutually beneficial - Russia