United States lost Russia and everything else 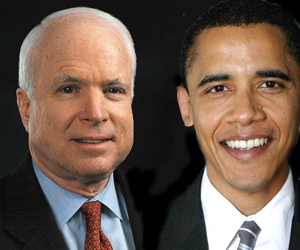 No matter what might have happened in Georgia — or any other former Soviet republic — U.S. citizens are far more worried about the safety of their bank accounts and retirement savings. And however hard today's Russia might try, it can never become the looming threat to the United States that the Soviet Union had been.

It is impossible to glean enough information from the candidates' speeches to determine what their respective policies toward Russia would be as president. Their overriding priority is to win supporters by saying exactly what voters want to hear. It is thus far more important for them to win over voters of East European ancestry in the swing states than to formulate a realistic policy on Russia. You cannot win votes with moderate statements. But that does not mean the heated rhetoric the candidates use on the campaign trail will necessarily translate into actual foreign policy later.

It is therefore less important to study the statements Senators John McCain and Barack Obama make regarding Russia, which are practically identical and lacking in substance, than to take a look at the problems that the winning candidate will inherit from outgoing President George W. Bush.

If we distance ourselves from the strong emotions that have characterized recent U.S.-Russian relations, we can see that Bush's role in them over the past eight years has been, if not positive, then at least restrained. Nowadays, only the laziest political commentators miss a chance to ridicule Bush's comment about looking into then-President Vladimir Putin's eyes and seeing his soul during the 2001 U.S.-Russia summit in Ljubljana, Slovenia. And for some inexplicable reason, Bush retained his desire to have friendly relations with his Russian counterpart until the very end of Putin's presidency.

Of course, it would be valid to ask what good that did if U.S.-Russian relations have fallen so low as to threaten a new Cold War. I will go on a limb and suggest that if Bush had not had such a strange predilection, the relationship between the two countries would have worsened much earlier and could have become more dangerous. For his part, Bush tried to accommodate the feelings of his "friend Vladimir" and made a greater effort to smooth over the rough edges of their relationship than he did for others. Further, Bush was less hawkish on Russia than other members of his administration.

Bush's ambitious foreign policy goals to reshape the world following the Sept. 11 terrorist attacks combined with a strong ideological bias led to an inability to cope with a range of subsequent challenges. Bush's excessively self-assured belief that he could achieve his objectives regardless of all other considerations turned into an arrogant attitude toward his global partners. In addition, his open disregard for international law and his reliance on military made a bad situation even worse. Although the Bush administration spent its second term trying to correct the mistakes of the first, the severe damage had already been done.

Moscow policymakers customarily viewed Bush administration policies as having been openly anti-Russian. I'm afraid it was worse than that. They were not intentionally anti-Russian, but they seemed so because in carrying out their plans, Washington did not see the need to take Russia's views into consideration — or those of many other international players. Those plans were at times part of a larger strategy only indirectly connected with Russia, such as expanding NATO membership and democracy throughout the former Soviet republics or creating a universal missile-defense shield with installations in Central Europe.

That neglect caused the relationship between Moscow and Washington to worsen rapidly. The U.S. position in world politics simultaneously deteriorated because of the same policies on a global scale. It would take hours to list all the major and minor U.S. foreign policy failures that accrued during Bush's presidency. With no states holding power or influence comparable to that of the United States — and with none likely to appear in the near future — Washington has only itself to blame for its failures. It follows that the relative strengthening of countries hostile to the United States — including Russia — is largely a result of the rapid decline of U.S. leadership, which probably reached its peak in the second half of the 1990s.

The favorite question of this election campaign — "Who lost Russia?" — misses the point. The better question would be, "Who lost everything?"

Much has been said in support of globalization. But when the talk turns to global politics, people focus on individual colors of the global palette and draw conflicting distinctions between them. It is impossible to pursue a separate policy for a single state that is detached from the overall context. The United States cannot dream up an underhanded policy for Russia without having to change the rest of its foreign policy as well.

Both U.S. presidential candidates have spoken of their intention to seriously reconsider Bush's failed foreign policy model. They have promised to restore good relations with U.S. allies and to work with them on an equal basis in solving global problems. In addition, they vowed to treat international institutions more seriously, although this is somewhat problematic since few of them work effectively. Nonetheless, the candidates' good intentions are encouraging.

The key to solving many global problems would be if Washington were to demonstrate a willingness to make a serious compromise with anyone and on any issue. In other words, when the United States sees that its plans elicit well-founded and logical objections from its foreign partners, it should be willing to step back and reconsider its course. Today, the United States gives the impression that it is opposed to any compromise and that it is prepared to achieve its objectives at any price.

As many have already said, the next administration will inherit the most difficult state of affairs in the country's foreign policy since 1968. That is when Richard Nixon became president against the backdrop of a failing war in Vietnam, worldwide indignation over U.S. actions, flaring tensions in the Middle East and an increase in Soviet power following the suppression of Prague Spring. During his 1 1/2 terms as president before being forced to resign over the Watergate affair, Nixon managed to untangle many of the policy knots created by his predecessor. Whether it be McCain or Obama, the person who takes the presidential oath in January will have to be prepared to tackle some very tough foreign policy challenges.