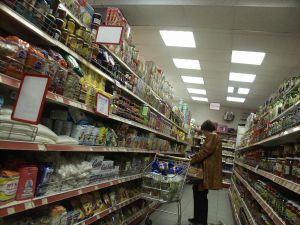 The current global financial crisis has resulted in Russians cutting down their shopping expenses, including those for food, estimations by experts at the Romir Panel monitoring company have revealed. People in small towns have already reduced their everyday shopping expenses by 9.5%, while the buying power of those residing in big cities has stagnated.

The estimations of September's household consumption index have shown that Russians have reacted to the current crisis by reducing their expenses. The consumer preferences of the country's lower middle class have been hit the hardest, experts say.

"Even in Russia's biggest cities, the opportunities for income growth in most families have been exhausted, with people starting to cut down everyday expenses," researchers at Romir Panel say. "People are limiting purchases to a minimum," echoed them Vadim Solod, CEO of Nerkom Group of Companies.

"Even in worst case scenario - which is unlikely to occur - we would only lose up to 20% of sale volumes due to consumers turning to cheaper goods," Vladimir Sadovin, General Director of the Moscow-based Azbuka Vkusa chain store, said, expressing a certain optimism.

However, according to Dmitry Potapenko, managing partner of the Marka and Gastronomchik chain stores, in November the current situation might lead to a "mass hysteria, when people will cease making purchases." In this situation, the management will be forced to begin a second wave of dismissals and request a delay in payments to suppliers.

At the moment, retail chains are trying to increase their profit margins in various ways, selling to customers as much as possible and paying a minimum amount to suppliers. Currently, their debts are growing and they use any opportunity to delay payment, a general director of a distributor company noted, saying this results in a "limited range of variety."

Meanwhile, suppliers will not easily yield to the retail chains' requests to delay payment and reduce mark-up. "Certain suppliers have even started to panic, trying to increase mark-up by 40%," Sadovin said.