Geneva talks off to bumpy start 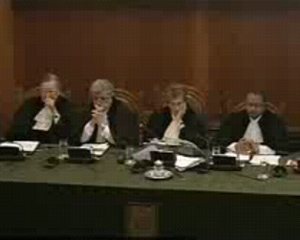 While U.S. and Georgian officials said the negotiations had failed, French President Nicolas Sarkozy said that a "painful" start was to be expected. Other sides called negotiations themselves a "helpful" and crucial part of resolving the conflict.

The first round of security negotiations over the South Caucasian conflict kicked off Wednesday in Geneva with two plenary sessions. The Russian delegation backed out of the first session because representatives from Abkhazia and South Ossetia were not invited. Russia was the first nation to recognize the independence of the two republics just weeks after a five-day war in early August, in which Georgia launched military action to reign in South Ossetia while Russia launched an attack to repel and "punish" Georgia.

The second round of talks involved representatives of the OSCE, the UN, the European Union, South Ossetia, Abkhazia, Russia, Georgia and the United States. This time, however, the Georgian delegation refused to take part due to the presence of representatives from its breakaway republics.

At issue were varying interpretations of the peace plan agreed upon by Sarkozy and Russian President Dmitri Medvedev on Sept. 8. According to the document, all sides were to begin holding negotiations on regulating peace in the region in October. While the document did not officially recognize the independence of South Ossetia and Abkhazia and did not treat them as such, its wording, pertaining to the evacuation of Georgian peacekeeping forces from the republics, suggested that in some ways, at least, South Ossetia and Abkhazia were not exactly full-fledged territories of sovereign Georgia.

The two republics had enjoyed de facto independence since a bloody conflict with Georgia following the breakup of the Soviet Union in the early 1990s, but Georgian President Mikhail Saakashvili, amid official aspirations to join NATO, has been trying to reign in the breakaway republics since coming to power in 2003.

According to South Ossetia's envoy to Russia, Dmitri Medoyev, the peace plan outlines that the republics in question should have equal status in the talks.

"Yesterday a group of experts traveled to Geneva to hold consultations on regulating the situation in South Caucasus region," Medoyev told The Moscow News on Wednesday. "This is a very helpful event that will go on for months, as was stipulated by the Medvedev-Sarkozy peace plan. Initially, the document stated that the initiative comes from Sarkozy and Medvedev. But various sides can take part in the discussions. There is no doubt that the side that sustained aggression from Georgia should take part in all rounds of the talks as equals. Otherwise, you get a situation where Australia can take part, but South Ossetia cannot only because Georgia doesn't want it to. That is absurd."

The Georgian side blamed Russia for hampering the talks. "Russia has just walked out of the Geneva talks ... which basically means that Russia has no interest whatsoever at this stage in any diplomatic process," Saakashvili told reporters in Brussels. Georgian Deputy Foreign Minister Giga Bokeria was quoted by the Associated Press as saying that "from the start Russia and it's proxies in Abkhazia and South Ossetia created difficulties." He explained that Russia was demanding official status for the delegations instead of just the chance to speak at working groups. Abkhazia's Foreign Minister, Sergei Shamba, who was at the talks, could not be reached by phone Wednesday or Thursday.

Meanwhile, EU representative Pierre Morel told AP the talks had "encountered procedural difficulties" and all parties had decided to suspend the meeting. He said they would meet again Nov. 18. But Johan Verbeke, special U.N. envoy for Georgia, said that the "process is on track" and the pause was made to take "some breathing space."

The Russian Foreign Ministry criticized Saakashvili for making such hasty conclusions. "Our meeting wasn't even over yet when Mr. Saakashvili rushed to say that the Russian side ended the consultations," deputy Foreign Minister Grigory Karasin was quoted by RIA Novosti as saying. Karasin said that not only were such statements untimely for a responsible politician, "but they were also lies." Karasin underlined that despite difficulties the talks went on normally.

"The position of a number of European countries is to alleviate tensions," Medoyev explained. "But whoever doesn't want peace can always say they don't agree with the format of the discussions. Our position on these talks is very straightforward. South Ossetia is a recognized independent republic. It has been recognized by [Russia] a member state of the UN Security Council. The process of South Ossetia's sovereignization cannot be turned back."

Speaking to reporters Wednesday after the Geneva talks, President Sarkozy warned against confrontation with Russia, saying it would be unreasonable. "I am told that the discussions started off painfully, but I would have been surprised if they had started off smoothly," Sarkozy was quoted as saying.

Russian officials praised the talks in general, calling them a breakthrough. "The fact that South Ossetia and Abkhazia were invited to the talks is already a certain breakthrough and a big achievement for Russian foreign policy," Viktor Zava­rzin, chairman of the State Duma Defense Committee, was quoted by RIA Novosti as saying. "No one was expecting for this to be easy."

Indeed, similar disputes over the status of smaller delegations have plagued summits for centuries, from the Congress of Vienna in 1815 to the talks over the wars of the 20th century.

But some officials pointed to a shifting tide in Europe's treatment of the conflict. As the negotiations started, the UN International Court of Justice in the Hague, contrary to Georgia's expectations, ordered both Russia and Georgia to protect civilians from ethnic violence in the Georgian separatist regions, in effect putting the blame for the conflict on both sides. When Russia repelled Georgia's military in South Ossetia, many rushed to condemn Moscow for an "inordinate" response.

"Today the situation is starting to change," Medoyev said of Europe's more understanding position towards Russia.

"Some countries are feeling a little embarrassed by their closeness with the United States on this issue."

The fourth estate on the conflict in the Caucasus

The South Ossetia crisis: lessons to be learnt