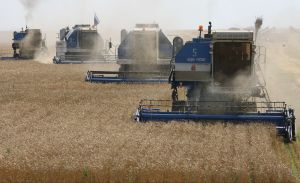 This year, an exceptionally voluminous grain harvest may help Russia to alleviate the pain brought about by the financial crisis, which is threatening to spread from the stock markets to banks and other spheres such as real estate and employment. But not all that glitters is indeed gold - the oversupply of grain on the market could end up doing more harm than good.

"This year, we may beat the post-Soviet record of 1992, when grain production in Russia reached the level of 106.8 million metric tons. The total amount this year will surely exceed 100 million tons," said Arkady Zlochevsky, the president of the Russian Grain Union, an umbrella organization uniting Russia's top grain producers. During the Soviet period, when harvests were traditionally higher than they are today, the record was set in 1978, when Russia, just one of the Soviet Union's 15 constituent republics at the time, harvested 120 million tons of grain.

However, this year's large harvest is not only a blessing, but also a problem for Russia's rural population. The oversupply of grain on the market may lead to a slump in prices, cutting the profits of agricultural companies and, consequently, lowering the living standards of the rural inhabitants.

"For agricultural companies, too large a harvest may even be more of a problem," Zlochevsky commented. "We plowed 90 thousand hectares more land this year for winter crops, but we are still not sure if we'll get a good return on our investment. The financial crisis dries up the incentive for increased production."

In the words of the producers themselves, there are two problems. The first one is the diminished availability of loans. The second one lies in the negative expectations of the food retail chains, which postpone payments for the delivered products or cut their orders.

Both problems are connected to the lack of confidence in Russia's banking sector, where many banks are unwilling to lend to each other or the domestic industry, as "short money" becomes less available due to the lack of foreign credit following the departure of foreign investors. So far, sizeable financial injections from the state failed to appease the worries of the financial market.

"It is clear now that the real black hole of Russia's economy is not agriculture. It is the financial market," Russia's Minister of Agriculture Alexey Gordeyev told journalists at a meeting at the Rossiyskaya Gazeta daily, referring to criticism of the state's subsidies for agricultural producers. "Look how much money was spent on making the banks feel better."

Between October 3 and October 10, Russia spent $15.5 billion from its stabilization fund, shrinking the latter by 2.8 percent. Most of this money was spent on loans to the country's banks. These loans are supposed to help banks combat the so-called liquidity crisis. Rosselkhozbank, the bank entrusted with crediting Russia's agriculture, received 25 billion rubles (about $1 billion) out of this amount. Russia's Finance Minister Alexei Kudrin warned against panicking, pointing to the fact that Russia's stabilization fund, with its $530.6 billion, remains the third largest in the world, and that the net increase in its amount since January 1, 2008, remains at the level of 11 percent despite recent expenses.

Talking to the press, Gordeyev reminded journalists that although food products at Russia's retail chains became 12 percent more expensive this year, wholesale prices for meat stayed the same, while milk and grain are even cheaper. In the minister's opinion, food chains, suffering from a diminished availability of loans and credits, pass their problems over to the agricultural producers, making them wait for their money longer.

"Before, the standard period between the delivery of an agricultural product and the payment from a food chain was 60 days. Now it is 90 days," the Russian Grain Union's Zlochevsky said. "Besides, in cases when food chains change their owners - you know that many actors on the retail market have been swallowed by banks - in that case the producer may not see his money at all."

But for foreign consumers, problems on the Russian food market amid expectations of a large harvest may indeed be a blessing. "We are expecting an oversupply of high quality wheat this year," Zlochevsky said. "The demand in Russia for this sort of grain is just 10.5 million tons, while we are expecting to harvest 15 million tons. The difference will have to be exported in a bid to decrease the pressure on the market."