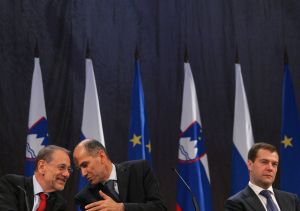 Both parties live according to temporary rules, although we realize that such a state of affairs is detrimental. Is there a chance to alter improve the relations?

It is a tricky question. The Caucasus war has stalled Russia-EU dialogue revived during a summit held in Khanty-Mansiisk, West Siberia, last June. The Baltic countries and Poland have serious doubts that dialogue can be resumed before the end of this year, especially since the EU has approved a coordinated stance on Abkhazia and South Ossetia and is insisting that Russia officially recognize Georgia's territorial integrity.

The EU cannot understand Russia's current or future policy. This is why it is not keen to accept President Dmitry Medvedev's proposal to start discussing a new European security system. Many in Europe fear that Russia's goal is to destroy existing security institutes, notably the OSCE.

Brussels does not need an open conflict with Russia, especially in conditions of a global economic crisis, which has upped energy security stakes. However, it may change its stance if a new gas war breaks out between Russia and Ukraine.
Until recently, dialogue with France, Germany and Italy has been more important to Russia than its relations with the whole of the EU, for understandable reasons. But in future this scheme will not be as effective as it is now, given the continued consolidation and upcoming change in the EU power system. Russia is not ready for this change.

A new partnership and cooperation agreement between Russia and the EU, which should provide the basis for their relations in the coming decade, should settle disputes and create a stable mechanism of political and economic cooperation, possibly including the creation of a free trade zone. The longer they delay drafting of the agreement, the less chance of the EU working normally.

So, the only thing Russia and the EU can do now is to start working openly and informally on key aspects of the future agreement, so as to create at least the foundation for their future cooperation. It is essential; it is in line with the two parties' interests.

The outcome of the U.S. presidential election is bound to have effect on the European policy. Presumably, it is going to be a negative impact. At the end of the day, it is Trans-Atlantic solidarity, not relations with Russia that has always been the EU's priority.

Andrey Fedorov, Director of Foreign Policy Programs with the Council for Foreign and Defense Policy, Deputy Foreign Affairs Minister in 1990-1991