Faith: the Russian bureaucrat's new must 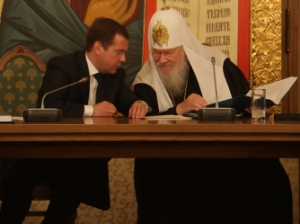 On Tuesday and Wednesday, Patriarch Alexy II, the head of the Russian Orthodox Church, held two important meetings, in which all of the members of Russia's political elite, including President Dmitry Medvedev, took part. The patriarch used these opportunities to both establish a tighter union between the church and Russia's political elite and further his cherished cause of rehabilitating the victims of Soviet repressions and condemning their tormentors.

Wednesday's meeting with the members of the Board of Trustees of the charity fund for the reconstruction of the New Jerusalem monastery in the town of Istra near Moscow took place in the Kremlin. The board's members included, among other top officials, President Dmitry Medvedev, former Prime Minister Viktor Zubkov, the Minister of Economic Development Elvira Nabiullina and Finance Minister Alexey Kudrin. Addressing his audience, the patriarch said that the reconstruction of the monastery, founded in 1685 by the Russian Orthodox Church's maverick Patriarch Nikon as a Russian variant of the Holy Land, complete with the Kidron river and mount Zion, entailed "huge renovation work, large scale new construction and the rebirth of communal monastic life."

The reconstruction of the New Jerusalem, which president Medvedev and patriarch Alexy visited in July, will require enormous expenses, since the "Russian Palestine," as the place used to be called before the closure of the monastery in 1919, covered dozens of square miles. Heavily damaged during the period of early Soviet anti-religious persecution and a two-week-long Nazi occupation, the monastery's Resurrection Cathedral was not rebuilt until 1980. At the time, it was used only as a museum and church services there were not renewed until 1995.

On Tuesday, the patriarch chaired a meeting of the Board of Trustees of the Orthodox Encyclopedia, a large-scale project whose aim is to publish a multi-volume reservoir of knowledge about Orthodox Christianity in Russia. And again the refectory hall in the cathedral of Christ the Savior in the center of Moscow was packed with the most influential of Russia's businessmen and state officials. Moscow Mayor Yuri Luzhkov, the Minister of Culture Alexander Avdeyev, Communications Minister Igor Shchegolev all met there to announce the inclusion of new members into the Board of Trustees. These included such figures as the Head of the Presidential Administration Sergei Naryshkin, the owner of the Renova company Viktor Vekselberg, one of Russia's richest and most influential "oligarchs," the CEO of the partially state-owned savings giant Sberbank German Gref and the Governor of the Samara region Vladimir Artyakov. The inclusion into the Board of Trustees of the Federal Education Agency head Nikolay Bulayev caused a small commotion at the meeting, since this is the first time that a highly-placed official of Russia's education system became directly involved in an essentially church project.

"Until recently, Russian education officials more or less successfully resisted the spread of the church's influence to such sensitive spheres as history or art classes at secondary school," said Alexey Makarkin, the deputy director of the Moscow-based Center for Political Technologies. "One of the church's main complaints to the state could be reduced to the following formula: we are your allies, so why can't you give us such a small favor as access to secondary school classes?"

The academician Yuri Ryzhov, one of the signatories to last year's collective letter against increased influence of the church in non-religious spheres of life, deplores the high involvement of state officials in the church's projects. "Russia is now more clerical than at any period during the last 100 years of its existence," Ryzhov said. "My attitude to government people's participation in the church's projects is utterly negative."

Indeed, participation in church projects seems to be quickly becoming a "must" for highly-placed state officials or business heavyweights. In his speech to the board, the patriarch expressed his gratitude to all participants, stressing the purely educational character of the Orthodox Encyclopedia.

"The Encyclopedia, whose eighteenth volume we are presenting to your attention today, is important for historical education, since one cannot understand Russian history without knowing about Christian Orthodox faith," Alexy said. "And it is precisely in history that the education of our people is most lacking."

During the Tuesday meeting in the refectory, the patriarch unveiled several projects aimed at exposing the crimes of the old Soviet regime against Orthodox Christians. The Orthodox Encyclopedia is supposed to be not only a book project, but also a series of documentaries and television series on various subjects connected with the Orthodox Christian faith.

"We plan to make a television series about the tragic fate of officers and military students ("yunkera") of the Moscow garrison who were slaughtered in the fall of 1917 by revolutionary troops sent in from St. Petersburg," the patriarch said on Tuesday.

In light of the nearly-official tendency to look for "positive pages" in the country's Soviet history, this stance puts the Russian Orthodox Church in a unique position of the official protector of the victims of Soviet repressions. If anything, this protector can hardly be accused of lacking influence - just look at the lists of its projects and their supporters.