Business
RBTH
By Maria Levina / Special to The Moscow Times 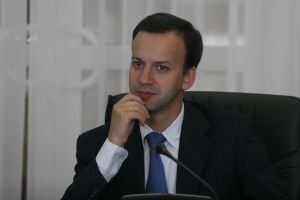 The mood was mixed at an annual investment forum in Moscow on Wednesday, with most speakers agreeing that economic growth would slow as the effects of the global financial crisis creep into real sectors of the economy.

President Dmitry Medvedev's economic aide Arkady Dvorkovich told the Russo-British Chamber of Commerce's investment forum that the volume of financial services would continue to contract, "and we are still far from a new equilibrium."

He said that while the global financial system was already in crisis, the real sector of the economy was only at the beginning of the slowdown.

"In the current environment, everyone has the same problems," Dvorkovich said, "and we do not make a distinction between Russian and foreign investors offering support to Russian and foreign partners." He said some Russian subsidiaries of foreign banks would receive support for Russian operations through the Central Bank.

Dvorkovich admitted that some of the country's banking players would face problems in the coming months.

"The banking sector will go through a wave of restructuring and consolidation," Dvorkovich said. "But there are no systemic risks in our financial system."

The crisis may stimulate the government to speed up the process of structural reforms that were being put off while the Russian economy was booming.

Andrei Bugrov, managing director of Interros and chairman of the board of the power utility OGK-3, was pessimistic, however.

"The outlook for 2009 is grim, full stop, the end to the global financial system as we know it," he said.

Bugrov also said it was obvious the markets were panicking, as certain companies were valued for less than the amount of cash on their balance sheet.

The financial system had to be better managed, Bugrov added, as the international volume of $50 trillion in derivatives trading over the past several years far exceeded global GDP.

"Sit tight and save your cash would be a very sound approach at the moment," Bugrov said.

John Nicholls, the deputy CEO of HSBC Russia, said HSBC approved a $200 million increase in the charter capital of its Russian subsidiary two weeks ago and was planning to launch its private banking and retail businesses here in the coming months. Nicholls said the bank had quadrupled its Russian team from 90 to 360 people in the last 18 months and did not plan to cut staff.

"We will be opening retail branches in Moscow and St. Petersburg in 2009 and plan to focus on quality of service," he said.

Jeff Costello, the CEO of JPMorgan International Russia, said that although JPMorgan had revised GDP growth forecasts for Russia to 3.5 percent in 2009, Russia was still better positioned than many other countries.

"To date, the actions of the Russian government have been extremely timely and effective," Costello said. "The devil will be in the details on how the money will be passed down to the economy."

But he also said investor confidence was affected negatively in the past weeks by the repeated closures of exchanges by the regulatory authorities. "Fund managers need to mark their investments to market on a daily basis," he said. "If the exchange is closed, they cannot do it. Many managers say when trading resumes they will switch to GDRs and ADRs."

Transparency remains one of the biggest issues for investors, and although some Russian companies are now trading at significant discounts relative to earnings, the return of foreign capital will also depend on Russia's image abroad.

Political analyst Yevgeny Kiselyov, the moderator for one of Wednesday's forums, said Russia's image abroad was at one of its lowest points ever, and despite falling oil prices and a global financial meltdown, this was yet another factor that had negatively affected the investment climate since August.