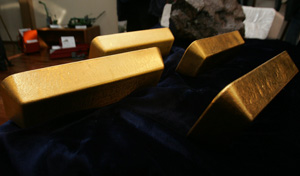 The global economic crisis has people all over the world thinking of how to preserve their savings with the banking system in turmoil and stock market plunging through another "floor" every day.

Gold coins and bullion, as well as jewelry sales have gone up sharply since last month.

However, gold performance has generally been unstable as the global financial crisis has hit this sector as well. Experts say gold prices can spike by many dollars in a two day period. However, its medium-term outlook is stable - it is expected to go steadily up in the next few months, reaching $950 or even exceeding $1,000 per troy ounce within a year.

This growth in value is the result of a current rush, as investors divest assets from the stock market. The world hasn't seen such "gold fever" since the 1970-80s oil crisis.

The United States Mint had to double the output of gold coins to meet the growing demand. In Russia, jewelry sales surged 50% and more in the past two months. Sellers directly link the trend to the aggravating economic crisis and are convinced that the majority of their customers are buying jewelry for investment purposes, trying to preserve their savings.

However, jewelry may not be the wise investment some think it is. First, it is ridiculously overpriced in Russia: the average price of gold jewelry here is 50%-100% higher than in other countries. Second, the retail cost of a gold ring, chain or pendant is much higher than that of a straight ingot, for example, whereas reselling the jewelry will only bring gold scrap value unless the jewelry has some historic or artistic value as in a Faberge piece.

Russians' increased interest in jewelry is probably rooted in a Soviet mentality. In the Soviet Union, people had no other legitimate options for investing in precious metals. Today, there are options, although none are guaranteed against loss. In today's commodities markets, it is only possible to resell gold at a profit either after a long period of time or during a sharp rise in global gold prices.

Russians were legally allowed to buy gold bullion in 1997. Most major banks offer the service now. However, gold investment has drawbacks: the purchaser has to pay an 18% VAT, which cannot be recouped when reselling. In other words, bullion can be sold without a loss only after the market price goes up at least 18%.

That is the theory. In reality, the margin between the sale and purchase price offered by banks is 20%-25%, or 2%-7% above the VAT, which produces the bank's profit. This means that if an investor decides to sell the bullion back to the bank in, say, two months during which gold increased in value by 20%, the investor would only receive the initial purchase price back with no profit.

There are other problems. The bullion can only be sold to a bank, which can reject it if, for example, there is a scratch on the surface. Moreover, the investor needs some place to keep the gold, and the best solution is to rent a safe-deposit box, which means an additional cost of 400-500 rubles a month ($15-$20).

Gold coins are a slightly better option, as they are not subject to the VAT. However, there are subtleties here, too. There are investment coins and memorial coins. The latter are more profitable, because they have a numismatic premium of 10%-15%. On the other hand, during a severe recession these may be worth only the scrap value.

Also, investment coins cost more than the material they are made of, and, as with bullion, the bank price is 20%-25% higher than the actual value in gold.

The easiest and most efficient, though risky, way to invest in gold is to open a cashless metals account with a bank. It is nominated in grams of gold instead of monetary units. Russia's Central Bank defines the gold price daily, based on international trading; commercial banks set prices which are 0.5%-2.5% higher than the regulator's.

The margin between the deposit and withdrawal value of the metal is not higher than 5% - the bank's service fee. The buyer has the right to close the current account and withdraw cash at any time, which means the profit or loss will only depend on current gold quotes.

However, to earn more, an investor could place the money with a time metals deposit, a service provided by only a few banks. The interest rates of such deposits are 0.5%-4%.

However, this investment option has one major drawback - cashless metals accounts are not covered by the government deposit insurance system. Simply put, if the bank goes bankrupt, the holder of a metals account won't be entitled to government compensation, but will only be able to retrieve the money (or part of it) through a legal bankruptcy procedure.

The opinions expressed in this article are the author's and do not necessarily represent those of RIA Novosti or RBTH.