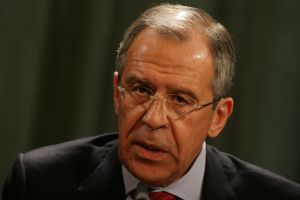 The sanctions issued by the U.S. State Department forbid U.S. government agencies from dealing with Rosoboronexport and 12 other companies in five countries because of their weapons shipments to Iran, which Washington suspects of building a nuclear bomb.

Lavrov accused Washington of breaking international law by imposing domestic policies on sovereign countries. "This is absolutely incompatible with the new realities in the current world structure," he said at a news conference after talks with Luxembourg's foreign minister, Jean Asselborn.

"We will take this into account in our relations with the United States," he said in televised comments.

The Foreign Ministry said in a separate statement that the decision would have a negative impact on six-party talks with Iran over its nuclear program.

David Merkel, deputy assistant secretary of state who oversees Russia in the State Department, said in an interview Friday that the sanctions were in everybody's interest and were imposed because the affected companies were breaching U.S. law by delivering arms to Iran.

"Now is not the time for business as usual with Iran," Merkel said.

Rosoboronexport, which is part of state holding Russian Technologies, suggested that the United States felt threatened by its growing clout in the global arms trade.

"We're not some dodgy shop. We are a government intermediary and follow all international laws and UN resolutions," company spokesman Vyacheslav Davydenko said.

Rosoboronexport has increased foreign deliveries by 23 percent in the first nine months of this year, which "the U.S. is without a doubt unhappy about," the company said in a statement. In July, Rosoboronexport expected to ship at least $6 billion worth of weapons abroad by the end of the year, Interfax reported.

The sanctions, published on the U.S. Federal Register, came into effect Oct. 23 but only gained attention after being assailed by Moscow. Also listed are companies based in China, South Korea, Sudan, Venezuela and United Arab Emirates and deemed able to "make a material contribution to the development of weapons of mass destruction or cruise or ballistic missile systems," say the sanctions, which are posted at www.gpoaccess.gov/fr/ (Page 63,226).

Merkel explained that a similar ban enacted in 2006 had expired in August. He could not immediately explain why it was only re-enacted in October. He noted that a ban against Sukhoi was lifted after three months in November 2006 because the jet maker had complied with U.S. regulations.

The renewed sanctions, which will remain in effect until September 2010, appear to be the same as those that were imposed on Rosoboronexport in July 2006 and expired this summer.

The sanctions will not hurt Russia's arms trade but allow the government to vent its political anger at Washington, said Viktor Mizin, an analyst with the Moscow State Institute of International Relations.

"Commercially, Rosoboronexport has no strong interests in the U.S. market," he said. "Our biggest arms buyers remain China and India, followed by Middle Eastern and Latin American countries."

He said the administration of U.S. President George W. Bush might have extended the sanctions because some in Washington believe Russia and China have done everything possible to water down U.S. efforts to impose sanctions against Iran. The next U.S. president can waive the sanctions, he added. "It will be interesting to see what the next administration does," he said.

Russian Technologies is headed by Sergei Chemezov, an ally of Prime Minister Vladimir Putin, and also has stakes in carmaker AvtoVAZ and VSMPO-Avisma, the world's largest titanium producer.

Boeing, which imports titanium from VSMPO-Avisma, said the sanctions would not affect business relations. "We have already taken steps to ensure that all of our activities in Russia are in full compliance with the sanctions," Boeing spokesman Dmitry Krol said in an e-mailed statement.