The lurking ghost of unemployment 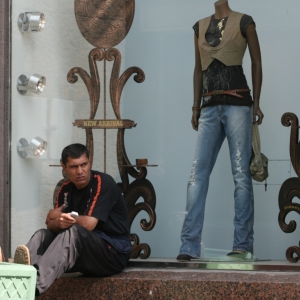 All talk of Russia as an island of stability has dried up by now - it is obvious that it is not. Russia's stock markets have fallen harder than most, and the newspapers are full of stories about bank "consolidation." Yet despite all this, the mantra repeated by experts and commentators of all stripes is the same: the crisis has not (yet) hit ordinary Russians; big job or wage cuts are still in the future. That may be true, but the wave of redundancies, if it is coming, is preceded by a rising tide of anxiety and rumor.

In late September, the Kommersant daily reported that RBK, Russia's première media holding which owns a television channel, a newspaper, and a news agency, was cutting 100 jobs - about five percent of its staff. And last week, the Renaissance Group, which includes Renaissance Capital, Russia's first investment bank and in many ways a flagship for the country's economic success, laid off 100 staff (about six percent of the total workforce) of its own. Company spokesmen are keen to play down the significance of these layoffs-given the global financial situation, relatively minor cost-cutting at financial institutions is not really news, they say.

And they are right. These relatively small-scale redundancies at high profile organizations are not the whole story. In fact, there is definitely a palpable sense of anxiety outside the financial system. A report from Goldman Sachs released on October 21 notes that "anecdotal reports from companies suggest that the freezing of the banking system caused immediate damage to the real economy in early October: a lack of working capital reportedly caused stoppages at a number of manufacturing facilities, sharp drops in demand for commodities, and the emptying of shelves in certain retail outlets."

The analysts' resort to "anecdotal" evidence reflects a confusion acutely felt by ordinary people. That short fall of capital has given rise to a sense of anxiety amongst many workers in Moscow. Circulating stories of sudden and often quite drastic layoffs have produced what one worker who survived a cull called "a shared sense that the situation is extremely unpredictable and could change by the hour."

One of the hardest hit industries is the construction sector, where investors had relied on cheap credit from banks to fund projects. Maria Puziryova, who owns a small architecture firm, said that as credit dried up, investors have either defaulted on payments or "postponed" projects, leaving contractors short of cash to pay their employees. She is yet to fire anyone, and hopes she will not have to, but may not be able to delay doing so for long. "We have some reserves from our budget, but it won't be enough to last through this crisis for three months. The majority of companies are firing their staff right now because they can foresee that they won't have the finances to pay them," she said.

The slump in property and construction was foreseeable, but the story is repeated elsewhere. "So far we had to let go of approximately 15 percent of the workforce," said an employee at a major IT company. "The decision came down very rapidly, and within 24 hours the people were dismissed." Asked what caused the job cuts, he said that "it looks like the investors decided to pull the plug when their businesses' clients started to default on their payments."

The other common feature feeding this sense of anxiety is a widespread awareness that this is just the beginning. "Everyone who survived the cuts is very tense and apprehensive about the company's future. The spirits are down, and the remaining employees are worried senseless that they will be on the chopping block next," said the IT worker who wished to remain anonymous. "At the moment, we still have some ongoing projects which provide us with a means to live. If we finish these projects now and get our money, and the crisis is still continuing, we too will suffer a lot, really badly," said Puziryova.

That gloom is deepened by the perception that the job market has also crashed. On Friday, the Head Hunter employment website posted nearly two and a half million resumes and just 75,000 vacancies. That inspires little confidence amongst those facing the axe, said the IT worker. "Lots of the vacancies on these sites have been frozen," he said sullenly.

To add to the confusion, the nervousness is not universal. Interestingly, financial workers seem to feel more secure than others. "I don't think people are feeling that their job is in jeopardy. Especially since they already did fire some people in September," said one bank worker. He said there was a sense that the management had taken the opportunity to do a little "house cleaning," rather than being forced into cutting the workforce.

It is not yet clear whether the anecdotal evidence reflects a real rise in unemployment, but there appears to be a certain amount of confusion across the country. "If you ask people if unemployment is high, about 40 percent say yes, but if you ask them if any of their relatives or acquaintances have lost their jobs as a result of the crisis, about two thirds say no," said Olga Kamenchuk of VTsIOM, a pollster. "In Moscow and St. Petersburg people tend to know more people and have bigger networks, so they hear more about it. And of course the big companies that make job cuts are centered in these two cities. But generally the picture is the same across the country: people seem to be confused by an overload of information about the crisis."

The future is foggier than ever, but amongst the gloom and nervousness there lingers a golden thread of optimism. The future for architecture and construction, says Puziryova, remains bright. "If we are talking about Moscow, they haven't built everything they could yet. And there are loads of projects from other regions and they are increasing all the time. If it is not in Moscow, it will be in Voronezh, in Libersk, Khanty-Mansisk, in Ikuta. There will be demand, no doubt about it," she said.

She may have reason for hope. Goldman Sacks believes that the "extreme liquidity shortage" that has hit businesses like Puziryova's and the IT worker's "will be temporary, and that recent government measures to re-start lending... will lead to a gradual recovery in the functioning of the financial system." Nonetheless, they note, "the economy is likely to have sustained lasting damage from this month's shock."