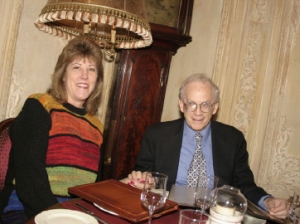 Traveling to Moscow at the end of September with his friend Phyllis Showalter, they also visited Novgorod and St. Petersburg and discovered the real Russia."Americans visiting Russia should ignore the guide books and not worry about crime or police harassment," he said. Goldberg, who had long wanted to visit Russia, enjoyed long walks, evenings in restaurants and riding the historic metro.

A resident of Silver Spring, Goldberg was among 1,200 readers who responded to ads for a cocktail reception at The Washington Post, and correctly answered questions about Russia. Dmitry Kudris, Aeroflot's General Manager, selected Goldberg's business card from all those attending the event to win this special prize.

The couple traveled from Moscow to St. Petersburg, and then took a train to the ancient Russian city of Novgorod. At the end of the trip, they stayed at Moscow's Sovietskaya Hotel, famous for its imperial Stalinist architectural style.

Well, where do I start? At the beginning, I guess.

My perspective of my first visit to Russia was very different from other first-time tourists, American or not, for I can remember back to Stalin's time, that is, even before the Evil Empire was officially Evil (and even worse). What is more, the Soviet Union and Russia have been a source of both personal and professional interest since childhood, more because I was a child of the Cold War and took an interest in Russian and Soviet classical music in my teens, less because my paternal grandfather immigrated to the U.S. from the Russian Empire.

However, I had not followed developments Russia as closely since retiring 10 years ago and was unsure of what to expect despite reading whatever the Washington Post and the New York Times wrote about Russia.
I knew that in the past 20 years Russia as a whole has opened up to the West and the world beyond, much as Peter the Great opened up his country three centuries ago. Progress in Russia has always been uneven, yet I was surprised to find that the drinking water in Russia's two largest cities was regarded as unsafe at the same time as the country has accumulated large cash reserves.
But some things were bound to be much as I expected: the Kremlin, the Hermitage, the palace at Pushkin, and an emotional visit to the dead notables at Novodevichy sandwiched between visits with friends in both St. Petersburg and Moscow whom I had met years ago on the Internet.

We travelled all around St. Petersburg and Moscow (Metro, walking, and taxi) by ourselves. Based on our experience, prospective travelers to Russia should not worry about pickpockets or other criminals or being hassled by the police, despite what some travel guides caution.