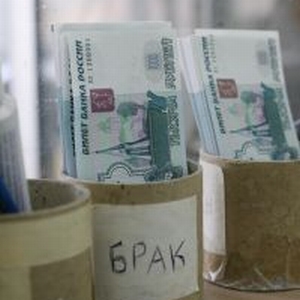 Those who thought that the ruble's powerful resurgence during Vladimir Putin's presidency was too good to be true can now claim to have been right. As the exchange rate of the ruble to the dollar hits a two-year low, many prefer to go back to keeping their savings and conducting their financial transactions in dollars. The government, however, is attempting to persuade people that it's too early to panic.

The ruble has long been a symbol of what many saw as Russia's economic breakthrough during the reign of Vladimir Putin, who didn't shun using the national currency's stable growth as a slogan in his presidential campaigns. After the notorious financial crisis of 1998 left the ruble in a shambles, the exchange rate of a ruble to a dollar gradually fell by almost a third, largely due to soaring oil prices. While the U.S. dollar had been the preferred currency for savings as well as business transactions, the government encouraged the population to convert their savings into rubles.

As the value of a dollar in relation to the ruble declined, the government's message seeped in, and people refrained from exchanging their salaries into dollars. Landlords began charging rent in rubles, while just three years ago such deals were almost exclusively made in dollars. During his tenure as president, Putin proposed to trade oil and gas for rubles and to make it into a convertible currency, while his successor Dmitry Medvedev suggested that the ruble should become a reserve currency in lieu of the weakening dollar and the blossoming euro.

But the recent rapid changes in the global economy quickly sent the ruble on a downward spiral, as its value just hit a two-year low. Aside from the liquidity crisis, the ruble was weakened by the declining oil prices, which confined the cash inflow into the country while the outflow increased amidst the stock market collapse. "All of these factors simply couldn't have passed us by," said Mikhail Shulgin, the senior analyst of the exchange market at Pro Finance Service.

Once the tables turned, Russians stormed the nearest bureaus de change in order to get rid of the diminishing ruble. Currency exchanges' dollar reserves ran thin as demand skyrocketed.

The authorities responded with a large-scale propaganda campaign aimed at bolstering the citizens' trust in the national currency. At a recent meeting with bankers, Putin warned against the switch back to dollars, calling such a decision "dubious" while asserting that there was no reason to panic. The Russian newspaper Izvestia went even further by publishing a negative article about the U.S. dollar, speculating that the U.S. government could soon take $100 and $50 notes out of circulation, rendering the dollar's future unstable. The authors claimed that the dollar's growth had no "fundamental reasons" behind it and encouraged readers to spend the rubles they already have instead of converting them to dollars.

But even though some of these claims may appear ridiculous, there is a certain grain of truth in them. "Neither the weakening nor the strengthening of a currency is much of a problem, the fiscal authorities can keep the situation in check," said Shulgin, adding that the alarming factor today is the sharp downfall of the ruble, which has already plunged to over 27 having traded at 23 just back in July. "The key objective of the Finance Ministry and the Central Bank is to stabilize the situation, and if we're talking about a slowdown, it should go on at a slower pace," he said.

Even given such a speedy decline, the impact on the economy is not critical. And if tracking the ruble's value based on the rates of the "bicurrency bracket" (an operational indicator of the Central Bank which is a combination of a dollar and a euro with the latter having a 0.55 share), it hasn't changed that much. "Russia's monetary policy wasn't based on the dollar, but on the bicurrency bracket, which remains stable at about 30.4 rubles," said Julia Tseplyaeva, the chief economist for Russia and CIS at Merrill Lynch in Moscow. "The 27.33 rate that we have today is the effect of the euro's fall to just 1.25 dollars," she added, noting that currencies in Eastern Europe and Brazil lost more of their value than the ruble.

The Central Bank rushed to bring the situation under control and put a limit on currency swaps at 50 billion rubles, while lifting interest on such operations (occurring ever more frequently) by two points to ten percent.

It was made clear that both the Finance Ministry and the Central Bank are willing to take drastic measures to keep the ruble from swift devaluation. The Central Bank is actively selling dollars from the federal reserves. On Friday alone, as much as $4 billion was spent in an effort to boost the demand for the ruble.

But experts argue that a bold fiscal policy aimed at bolstering the currency can only have a limited effect, making it clear that more fundamental changes in the economy are needed to stabilize the ruble when commodity prices aren't what they should be. "What is done now can settle the panic in the market," said Shulgin. "But they alone can't do it all; no monetary regulators can make the situation consistent."

"A well functioning banking system is a very important factor," he continued. "What we have in Russia isn't close to the developed countries, only when we have it we'll be able to talk about a stable national currency."

While the ruble is unlikely to weaken significantly, it makes sense to diversify savings and currency portfolios to balance them out and create a cushion strong enough to absorb the impact of the national currency's value volatility. While downplaying the falling rates makes perfect sense, giving in to the appeals to rely on the ruble could prove to be a mistake. "The ruble has been under pressure for over a month, and I think our people have been smart enough to have already taken adequate measures," said Tseplyaeva.