Paving the way for the Libyan leader 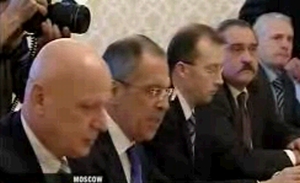 A delegation from Libya is now in Moscow to prepare for the official visit of the country's leader Muammar Gadaffi, which will take place from October 31 to November 2. It is expected that multi-billion-dollar arms deals will be signed during the course of the visit.

The Libyan leader's son, Moatessem Gadaffi, who's heading the top-level delegation, has held talks with the Russian Foreign Minister Sergey Lavrov. Opening the meeting, Lavrov said he was sure Gadaffi's visit will be a success.

Citing an official in the Russian Technology Corporation, the Vedomosti business daily wrote last Monday that contracts had been discussed for the supply of more than a dozen of fighter jets, tanks and air defence systems to Libya.

Gadaffi, who has ruled the oil and gas-rich African state since 1969, last visited the Russian capital in 1985, before the break-up of the Soviet Union.

Libya's Soviet-era $US 4.6 billion debt was written off in exchange for new contracts with Russian companies. The largest deal is a $US 3 billion contract with the Russian Railways monopoly, which will build a 554-km (344-mile) railway in Libya. The deal was sealed during the visit of the then president and current prime minister, Vladimir Putin, to the country in April 2008.

Russian energy giant Gazprom, the Libyan national oil company, and the Libyan African Investment Fund have also signed memorandums to set up joint ventures to launch production in Libya and other African states.

Back then Libya and Russia also agreed to boost initiatives aimed at ensuring security and stability in Africa. The two countries are ready to support efforts on the reduction of military activities in the Mediterranean region.