One Soldier's War by Arkady Babchenko 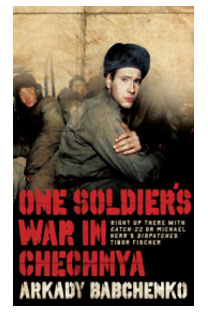 "A hypnotic and terrifying account . . . Babchenko's honesty has the force of a blunt object . . . Simply a great book." -Mark Bowden, author of Black Hawk Down

One Soldier's War is a visceral and unflinching memoir of a young Russian soldier's experience in the Chechen wars that brilliantly captures the fear, drudgery, chaos, and brutality of modern combat. Reviewers around the world have hailed it as "remarkable . . . a work of both autobiography and the imagination in the tradition of . . . Ernest Hemingway's A Farewell to Arms" (Hugh Barnes, The New Statesman), "a modern equivalent of All Quiet on the Western Front" (Zurich's Sonntagszeitung), and "right up there with Catch-22 and Michael Herr's Dispatches" (Tibor Fischer, The Guardian).

In 1995, Arkady Babchenko was an eighteen-year-old law student in Moscow when he was drafted into the Russian Army and sent to Chechnya. It was the beginning of a torturous journey from naïve conscript to hardened soldier that took Babchenko from the front lines of the first Chechen War in 1995 to the second in 1999. He fought in major cities and tiny hamlets, from the bombed-out streets of Grozny to anonymous mountain villages.

Babchenko is introduced to the terror of war at the very start of his service. During his six months of training, instead of being taught how to fight, he and other new recruits are savagely beaten by their own superiors as part of a longstanding hazing practice known as dedovshchina. Later, in battles at the front, he witnesses acts of unspeakable brutality-one comrade is sliced open and strangled with his own intestines-as well as moments of heartbreak and humanity-in a small village, the mothers of missing soldiers pick through piles of dead bodies to look for their sons. Throughout the book, Babchenko takes the raw and mundane realities of war-the constant cold, hunger, exhaustion, filth, and fear-and twists it into compelling, haunting, and eerily elegant prose.

Like Anthony Swofford's Jarhead and Tim O'Brien's The Things They Carried, this is a spellbinding book in which one soldier's story is rendered with such power, precision, and insight that it transcends his own experience and captures the universal experience of warfare. One Soldier's War is a devastating book by an extraordinary storyteller that "should be required reading for anyone who still harbors the illusion that war has some redemptive qualities" (Philip Caputo).

Arkady Babchenko was born in 1977. In 1995, at the age of eighteen, he was drafted to fight in the first Chechen War and then in late 1999 volunteered to return for six months during the second Chechen War. A law graduate, he currently works as a journalist at the independent newspaper Novaya Gazeta. This is his first book.

"Arkady Babchenko has written a hypnotic and terrifying account of his enforced participation in the Chechen wars, one that is entirely free of the self-absorbed razzle-dazzle that too often passes for `literary' writing these days. The book's power is in its clarity and detail. `It turns out that there is nothing out of the ordinary about war,' he writes. `It's just ordinary life, only taking place in very tough conditions with the constant knowledge that people are trying to kill you.' Babchenko's honesty has the force of a blunt object. He is surrounded by killing and by death, eager for a wound that will not kill him but take him out of hell. The killing he does shatters him to his core: `The main thing for me was to survive and to think about nothing. . . . A different soldier had been born in my place, a good one-empty, devoid of thought, with a coldness inside me and a hatred for the whole world.' It is simply a great book." -Mark Bowden

"I have not read a book about war and soldiering like One Soldier's War since All Quiet on the Western Front. Babchenko's prose, like Remarque's, is stark but evocative, eloquent in its simplicity, and absolutely unflinching in its honesty. He presents the face of war with all cosmetics off, an utterly brutal and brutalizing experience that does nothing but kill and maim people spiritually as well as physically. His book should be required reading for anyone who still harbors the illusion that war has some redemptive qualities." -Philip Caputo

"One Soldier's War should be required reading-not just for war buffs or historians, but for all Americans so that they might see not only the horrors that mankind can bring upon itself, but the dark side that every 18-year-old soldier discovers-a dark side that transcends borders and backgrounds, from the jungles of Vietnam to the slums of Baghdad and, in this case, to the frigid cold of Chechnya. Babchenko takes the reader along through the torture, starvation, and the absolute terror, and he does so in a lilting prose that leaves frost on your breath and a chill in your bones. . . . One Soldier's War is like nothing I've ever read and in one fell swoop has become a favorite book of mine-a testament to not only the torturous despair of his experience, and of the experience of millions of young men, but to his voice, which speaks for countless veterans from every war." -John Crawford