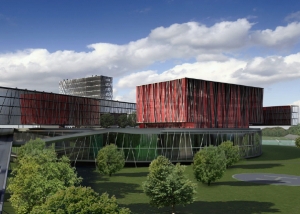 One of the current constraints on growth in Russia's booming economy is a critical shortage of experienced people. To address this glaring need, the Skolkovo School project was launched on September 21, 2006.

Dean of the Skolkovo school Andrei Volkov shared his views with RBTH editor A. Zagorodnov on the school's future.

RBTH Dossier
Andrei Volkov is the dean of the Skolkovo school and one of the leading experts in the area of higher education in Russia. Prior to joining Skolkovo in 2006, he worked as a Vice Rector at the Russian Government
Academy of National Economy.
An engineer by education, he is President of the Russian Mountaineering Federation.

Your school will be Russia's first with its own endowment; how do you view this?
We registered our endowment over a year ago; it already has over $1 million. We are, indeed, the first in Russia. Unfortunately, many in Russia interpret an endowment as simply a sum of money that lies in a bank and is spent periodically. But the entire ideology behind an endowment is independence from political and economic factors.
Markets jump up and down, but education follows a different cycle: Its models and approaches follow cycles of 10, 15 and even 20 years. It can't allow itself to be as volatile as economics and politics.
The endowment is part of a greater battle in Russia to convince people to look at education differently, as an independent entity. This concept hasn't existed in Russia before because our "endowment" was the state for a very long time. In 1991, the state rejected this role and we moved to a liberal economy. It means responsibility, and people should not only rely on the state.

What are the most important principles of your school? What is the essence of your style?
We're based on the concept of "experiential learning," i.e., learning by doing. That's why a Skolkovo education is based on realizing five major projects [in Russian or foreign corporations, NGOs or state organizations], which should be complemented by the knowledge gained through lectures.
Very few business schools follow this model. Perhaps one of the few exceptions is MIT; they send their students all over the world for a period of four weeks with practically no support to realize projects in Africa, Brazil... wherever. This model is very similar to ours, but we've gone a step further and expanded it to the entire length of the education.
Most important is not simply swapping students and professors with other schools, but exchanging ideas in our vision to build a new type of business education. This sounds revolutionary, but, having spent the last 18 years in business education, I can say that, to me, this sounds banal. I'm convinced that the future of business education lies with active, even aggressive, student involvement.
In reality, we are usually only able to accomplish two or three major projects because such projects usually take 7-9 years to complete. I'm talking about finding people and resources and organizing them to some mission. We'd like our Education market scenarios and volume students to concentrate that process and try something new, not necessarily in business. They can realize projects on a municipal level, found a start-up, enter emerging or developed markets...whatever.

What are the criteria for choosing students and analyzing their accomplishments?
Success is a very difficult thing to measure, and we believe it incorrect to categorize it exclusively according to some formal criteria, such as income, titles or awards. This just doesn't apply to our students.
The "mainstream" of modern education is entrepreneurial. We are interested in entrepreneurs who can take a project from scratch and realize it 100 percent of the way. These are people who are not simply responsible for a single duty set before them, but who are focused on accomplishing an entire multifaceted project.
Of course, no one person can realize every component of a complicated project. Subsequently we need people who are able to form and work within collectives, often international ones.
We will have some formal criteria: maybe some tests, interviews. But the most important thing will be people who have already worked and have reached a ceiling (not simply students who studied for a long time and decided to get an M.B.A. "for dessert").
I dream that Skolkovo could become a major component of lifelong learning to its students. In other words, having used us once, our students will continue to use Skolkovo as a resource until the end of their careers.

Do you plan to establish branches in other parts of Russia?
I'd like to emphasize that we're not thinking at all about opening branches in other parts of Russia yet. We are, however, very interested in establishing a presence in China, India and Brazil. I'm not just talking about attracting students from those countries, but also having our students study there, complete internships and realize joint projects in those countries. We are convinced that the global economic space is already being deeply influenced - and changed - by these so-called emerging markets.

Skolkovo's tuition is rather expensive. Do you plan to offer any student loans, as is commonly done in the U.S.?
Yes, a Skolkovo education will be expensive. We believe that people interested in a managerial education are able to find the resources to invest in themselves. We don't exclude the possibility of financially supporting our students in some way, although this isn't a priority at the moment. This support will be of a responsible nature, though. We could offer loans that would have to be paid back later, but not monetary grants.