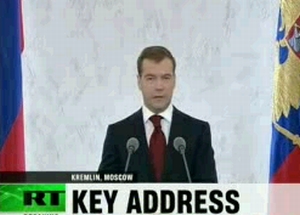 For the first time since the beginning of his term in office, President Dmitry Medvedev is addressing the Federal Assembly in the Kremlin. He started his first State of the Nation Address with an assessment of the current year's events. Medvedev said that in 2008 Russia underwent not only the renovation of the key power institutes after the presidential election, but also a very serious challenge.

Watch his speech on video

"A barbaric aggression against South Ossetia and the global financial crisis - two very different problems which nevertheless have common traits and a common origin, if it could be said so," he said. "A local reckless enterprise provoked a rise of tensions far behind the region's borders, in the whole of Europe, in the whole world. It called into question the efficiency of international security institutions and practically destabilised the basics of the world order."

President Medvedev added that the global financial crisis also started as a local emergency situation in the U.S., but being closely linked with all developed countries, "the U.S. economy has pulled down other world markets. And this crisis has also become a global one."

"The lessons of mistakes and crises of 2008 proved to all the responsible nations that it is the time to act, and it is necessary to radically reform the political and economic system," said Medvedev.

He believes Russia is ready to collaborate with the US, EU and BRIC countries to make this happen, and also to make the world a fairer and safer place.

"Our nation is rich, spiritually and morally. We have things to be proud of, we have things to love, to stand up for, to defend, to reach. That's why we will not retreat from the Caucasus," he said.

Russia's actions during the August war in South Ossetia were not directed against Georgia or its citizens, but at saving the people of South Ossetia and Russian peacekeepers.

"It was also aimed at providing the lasting security of the South Ossetian and Abkhazian people, first of all from the recurrences of felonious adventurism and the current Georgian regime," Medvedev said.

Dmitry Medvedev believes that when Barack Obama becomes U.S. President, the relations between the two countries will get a `second wind'.

"I underline it: we do not have a problem with the American people, we do not have an in-born anti-Americanism and we hope that our partners, the new U.S. administration, will choose fully-fledged relations with Russia," he said.

He hopes progress in Russia-U.S. relations would be key to solving many international problems.

But President Medvedev also said that Russia will not allow the domination of a single country in any sphere.

"Together with all countries interested we will be creating a really democratic model of relations. The world cannot be ruled from one capital. Those who do not want to understand that will be only creating problems for themselves and for others," Medvedev said.

The Russian president said that Russia will not go ahead with plans to take three regiments in the Kotelsk missile division off combat duty. He added that Russia could deploy Iskander missiles in the Baltic exclave of Kaliningrad if the need arose.

Medvedev said there would be limited state intervention in industry and the financial sector, no matter how hard the crisis may strike the economy.

"I want everyone to know: our goals are unchanged. Sharp fluctuations in the political and economic situation, turbulence of the world economy and even forced military and political tensions will not become the ground to dismount democratic institutions, nationalising industries and the financial system. Political freedom of citizens and their private property are untouchable".

President Medvedev declared that it would be wrong to use the current economic situation to settle old scores or create an environment of unfair competition.

The President stressed the need to widen participation in politics and give small parties the opportunity to be represented in parliament.

"My first proposal is to grant representation guarantees to voters that support so-called small parties," he said. "I believe parties that win between 5% and 7% of votes may be able to count on one or two seats."

He also proposed to increase the presidential term in Russia to six years and the State Duma to five years.

Medvedev said that any infringement of civil rights and freedoms, or any action that worsens the material position of citizens, is immoral and illegal.

The president sharply criticised Russia's bureaucratic apparatus: "The state machine here is the biggest employer, the most active publisher, the best producer, the court in its own right, the party of its own accord and, eventually, is the people of its own accord. This system is absolutely ineffective and produces only one product - corruption. That in turn gives way to mass legal nihilism."

In his opinion, such a system contradicts the Constitution and slows down the development of an innovative economy and democracy.

"A strong state and almighty bureaucracy are not the same thing," he said. "The first is needed by civic society as a tool for development and to maintain order, for protecting and strengthening democratic institutions. The latter is deadly dangerous for society. That's why our society must calmly, insistently and without delay develop democratic institutions".

The Russian president also called for a "large scale and systematic talent search in Russia and abroad. We need to start a `head hunt' and welcome young, talented people to fundamental and applied science."

According to Medvedev, no matter how good the laws and strategies of the state are, their implementation is totally dependent on the people involved.

"Their intellectual energy, their creative force is the main treasure of the nation and the main source of progressive development," he said.

State of Nation Address: What's it all about?

The Annual State of the Nation Address is a constitutional duty of the Head of Russia. The President reports on the current situation in the country, announces his stance on the main domestic and foreign policy plans for the current year, and outlines the important decisions made in accordance with the constitutional authority.

The Address is the country's main policy document and is intended to give society a guiding line on priority problems and solutions.

The President personally works on the text of the Address and its content is never disclosed before hand.

This is the only time when the two come together.

The Annual State of the Nation Address was first delivered in 1994 by Russia's first President Boris Yeltsin. The tradition was then fixed in the Russian Constitution.

Dmitry Medvedev will deliver his first Address not in the Grand Kremlin Palace's Marble Hall, as his predecessor Vladimir Putin did, but in St. George's Hall.

To find out more about Vladimir Putin's final address to the country's political elite, please follow the link

The President's Address is usually broadcast live by the country's federal TV channels and attended by numerous Russian and foreign journalists.

This year about 300 journalists were expected to attend.

"This is the 15th address, but the first for this president. We will see his personality through his speech and the topics he chooses. That's when we will really get to know and see the new Russian president," said Ludmila Pikhoya, former speechwriter for Boris Yeltsin.

The new president chose a new place and a new time for the address, but will it be a fresh start?

"I've witnessed all the addresses. They get tougher every time in terms of the content as well as the demands. I'm sure this president will stick to the tradition," Vladimir Zhirinovsky, Liberal Democrat Party leader, said.

Many agree this time that the speech will have to look at priorities beyond Russia's borders. First and foremost is the crisis in South Ossetia

"Definitely the problems of international security will be in focus. The events in the Caucasus were an indicator of the general state of relations in the world," Sergey Vikto, Moscow State University of International Relations, said.

"We will not allow the deaths of our citizens to go unforgiven. Those who are to blame for the killings will be punished," Dmitry Medvedev said.

Russia's response was widely criticized by the West, but that didn't stop Moscow from recognizing the independence of the two break-away regions.

"Events in the Caucasus dispelled whatever illusions people had remaining from the post soviet period. Those illusions were about the world being just and about the current security system being optimal," the Russian President said.

The address will define the new lay of the land for Russia's foreign policy but many expect Medvedev to go further in the realignment of global defences.

"Medvedev proposed a new configuration of European security and found understanding within the EU. Now he has to give an actual recipe," said Director of the Center of Political Information Aleksey Mukhin.

Moscow's recent dialogue with the EU has not been an easy one, and relations with Washington are at its worst since the Cold War. "It was a general illusion to believe that one country, even the mightiest country, could take up the role of global government," Medvedev said.

On November 5, Medvedev will have one more mission, which is "to form a new position with the new leadership of the US" according to Aleksey Mukhin. "The Kremlin understands that relations with Washington have to improve," he added.

The address has already been postponed twice, but in his video blog, the president made it obvious that he and his team are on top of things.

The speech comes at a difficult time with the financial meltdown battering economies around the globe.

"A crisis that started in one of the world's biggest countries, the United States of America, unfortunately spread across the planet, forcing almost every country to search for answers," Dmitry Medvedev said.

Medvedev is definitely the one to give that answer for Russia

"The mechanism to counter the crisis is now clear, so he now knows what to report to the people, what to demand from parliament, so I hope we will hear how he will fight the crisis," said Aleksey Mukhin, Director of the Center of Poltical Information

Medvedev is the first Russian leader with a background in private business, and he has been showcased as a man who's well aware of what an industry needs. One of the priorities he set as the president is to fight corruption.

"We need our law-enforcement agencies and our authorities to stop terrorizing business," the Russian president said.

But so far his words and his bailout plans are yet to improve the markets' charts which still appear to look like a roller-coaster ride.

Medvedev has a unique chance: to not only take part in rebuilding the financial markets and international security framework, but also to initiate these changes. His first address to the Federal Assembly will show whether or not he takes this opportunity.