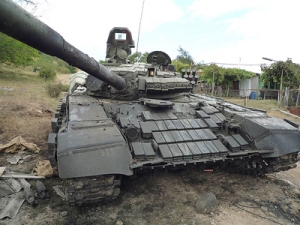 For Russia the informational war has become World War III. It was lost by Russia in August 2008, during the first five days of the hostilities in the Caucasus. Though the Russian population regarded the August war as justified, Russia and its army were exposed to critical attacks of the global media.

During the war, Saakashvili reiterated that the hostilities in the Caucasus resulted from the Russian aggression against the allegedly peaceful Georgia. Global media kept showing the devastations in the Georgian city of Gori and the pictures of the Russian artillery. The skillfully arranged footage and carefully adjusted texts instilled the corresponding notions in the brains of the US audience. In the meantime, the Georgian President kept telling the world that Russia's aggression targeted not only Georgia, but also the US, the EU, and NATO.

The Western media keep spreading the myth about the Russian aggression against the small defenseless Georgia. Russia continues to be portrayed as the hegemon and conqueror. Russia's offensive in Georgia is likened to the Soviet invasion of Afghanistan, Hungary, and Czechoslovakia, and the policy of the current Russian administration is decried as "Stalinist" or "fascist".

Western media resorted to downright deception while covering the Five-Day War. Any attempts to make the views held by Russia and South Ossetia known to the public were blocked. A vivid example is the interview given by two Ossetian women to FOX News. They were not allowed to go on as soon as it became clear that they were about to thank Russia for saving them. The world saw the conflict through the eyes of Tbilisi.

The US has enough political influence to parlay its version of the events into the viewpoint dominating the opinion of international organizations and the general public. The CNN is often described as the informational miracle of the XX century having unparalleled influence over the audience. It aired the footage borrowed from Russia Today showing Tskhinvali in flames after the bombardment by the Georgian artillery, missiles, and warplanes while the commentator said it was the Georgian city of Gori devastated by the Russian army. It was explained later that a mistake had been made but the footage was on the air for hours while the mistake was mentioned only briefly and just once.

Informational operations against Russia are launched in full accord with the concept of the informational warfare. V. Putin revealed the essence of the approach when he said Western specialists are able to present the black as the white and the white as the black.

Georgia was also the first to launch an attack in cyberspace. When Tskhinvali was shelled on August 8 the majority of the South Ossetian sites were also knocked out. Later Russian media including Russia Today also came under cyberspace attacks. The response followed shortly as the sites of the Georgian President, parliament, government, and foreign ministry suffered malicious hacks. The site of Georgian President Saakashvili was simultaneously attacked from 500 IP-addresses. When the initially used addresses were blocked, the attacks resumed from others. The purpose was to render the Georgia sites completely inoperable. D.D.O.S. attacks overload and effectively shut own Internet servers. The addresses from which the requests meant to overload sites were sent were blocked by specialists from the Tulip Systems, but attacks from new 500 addresses began in just minutes. Cleaning up after a cyberspace attack took an average of 2 hours.

While the fighting raged, the Georgian side persistently overstated the Russian casualties. According to Georgian media, by the end of the Five-Day War, the number of warplanes lost by Russia totaled over 20, but the claims were not supported by any video or other documents. Speaking at a rally on August 14, Saakashvili said that Georgia was invaded by 1,200 Russian tanks. The number simply could not be real as the Treaty on Conventional Armed Forces in Europe sets a ceiling for the number of tanks that makes it impossible. The informational aggression has nevertheless worked, at least in what concerns the Georgian audience. Whereas in the early 2007 only 25% of Georgians supported the military solution to the conflict with the breakaway Republics, by July 2008 polls showed that the number rose to 80%. The West played on the side of the Georgian media which day after day made the country's population believe that its army was "hardened in Iraq" and experienced, and President Saakashvili was a talented military commander. Georgian media deliberately distorted the intelligence data to portray Russia's army as incapable and the South Ossetian self-defense forces as semi-criminal and weak.

At present the theme of the war between Georgia and South Ossetia is used to address entirely different issues. For example, the treaty with Poland is signed by which the country is going to host the US missile shield infrastructures while criticism is leveled at Russia for deciding to arm its Baltic Navy with nuclear weapons. The US did not even have to invoke the Iranian missile threat to convince Poland to agree to the missile shield hosting deal as the war in the Caucasus created exactly the informational context the US needed on the occasion.

The informational warfare is a geopolitical reality. So far, the Russian political elite - as the Soviet political elite in the past - largely failed to appreciate the fact. This is the root of many of Russia's current problems.