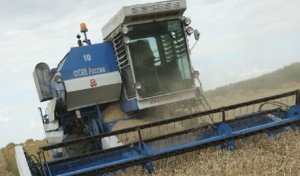 Russia went from being the world's largest wheat supplier in 1910, with 36 percent of the market, to one of its biggest importers n the waning years of the Soviet Union. The Soviet kolkhozy, or collective farms, failed as communism collapsed, and villagers abandoned the land.

But now farming across Russia is making a comeback. Commodities traders, food processors and others are beginning to buy farms. These new investors are pouring billions of dollars into the land. Russia has millions of acres of unused arable land, an area the size of England and Wales. Siberia accounts for a fifth of all Russian farmland and has reclaimed more land lying fallow than anywhere else in the country this year. Russia will produce double what it produced in 1998, when the government defaulted on approximately $40 billion in domestic debt and devalued the ruble. Meanwhile, the global financial crisis is driving prices lower, and exports are waning. As a result, Russian prices are going down, destroying incentives for agricultural producers to increase output.

Russia has millions of acres of farmland and potential for producing high quality grain. Can new investment and modern production spur a renaissance of its longfallow farmland? Obstacles include abandoned rural areas and a lack of infrastructure.

Is it possible that Russia can become the visionary wheat grower once depicted in the breathtaking, utopian paintings of the Social Realists? The Soviet Union obsessed over its iconic wheat production but in the end imported almost all its grain.

Yet Russia may become a major producer and exporter of grain, analysts say. There are, of course, tough obstacles to overcome. Most farmland is rented at high prices, Russia has abandoned its rural regions - some villages lack roads - and grain prices today are disappointingly low.

Yet it is clear that other countries need Russian food. Simply, the idea is to grow more and the buyers will come. United Nations Secretary General Ban Ki-moon said that to satisfy the growing demand of the planet's population, the world needs to increase food production by 50 percent by 2030. Russia is one of the few countries that has the necessary resources: nearly ten percent of all of the world's arable land, 20 percent of fresh water and, in many regions, an increasingly satisfactory climate.

During September's harvest, Russian farmers expected a record high grain crop of more than 102 million tons, compared with last year's harvest of 81.8 million tons. Grain traders also expected high profits from the export of grain this year. Russian industry representatives reported the grain yield could increase to 150 million tons, which would be enough to feed the world for 7 weeks.

Russia, however, has competition. The United States, European countries, and Ukraine are eager competitors, and as their supplies on the global market have increased, prices have dropped.

Meanwhile, the Agricultural Review for 2008-2017, published by the Organization for Economic Cooperation and Development and the U.N.'s Food and Agricultural Organization, forecast further price decreases for major food products. Speculation that Russia could turn into the world's food basket suddenly seemed less sure. "Our objective is to support prices on the grain market," said Russian Agriculture Minister Alexei Gordeyev. It is unprofitable to develop agricultural production while grain prices are low.

But, according to the Russian Agriculture Ministry, Russia's share in the world agricultural production is quite low due to an inefficient use of land. Even in this peak year, the average grain yield was only half of average European production. And in Siberia, which grows high quality wheat, the harvest was even lower. By different estimates, Russia has as much as 100 million acres of unused farmland.

Yet the current surge in global food prices overall has made farming more profitable. Foreign capital and modern agricultural technologies were introduced into Russia. The result is quite impressive - the best farms, which are part of foreign capital holdings, have increased their profitability.

These rents are increasing. Several years ago, in the Belgorod and Voronezh Regions, approximately two and a half acres cost $100 to rent, and now the price has increased to $500. Therefore, new agricultural holdings try to buy land. In the Central Black Soil Area, the average yield can increase when modern agricultural technologies are used.

These prices are still lower than in many countries, but costs for maintaining the land will grow, in part because most Russian villages are deserted. As many as 18,000 villages disappeared from Russia's map during the past 15 years, as young people moved to cities right after graduation. Very few returned to their villages. According to the Federal State Statistics Service, last year's average monthly agricultural wage was $140, the lowest of all industries. Moreover, about one-third of villages are not connected to highways. Russia, which supplies Europe with a quarter of its gas needs, has not yet provided 60 percent of its own villages with gas.

To guarantee production and an adequate workforce, considerable investment in infrastructure is needed. In particular, Russia does not have ports on the Pacific coast that would allow large-scale grain shipments. It hinders Russia's expansion to the Japanese, Philippine and Indian markets. As a result, the highest quality Siberian grain is inaccessible, since Russia's main exporting ports are located on the Black Sea.

The program for agricultural development by 2020 includes increasing annual average grain production to 125-140 million tons, and exports to 45 million. But Arkady Zlochevsky, President of the Russian Grain Union, said that one of the results of this year's peak season would be to scale down the attractiveness of more technologically advanced grain production for investors. "The investment in modern technologies will fall short of expectations" because "the more grain, the lower the prices and the greater the losses."

But the authorities are planning to create a grain corporation with a state share, which will control up to 50 percent of Russian grain export, and therefore, could influence world prices. It looks more and more possible that, with proper investment, Russia could become a world supplier of not only energy, but he most important staple of all, food.

Oleg Monastyrsky, head of the Krasnodar All-Russian Research Institute for Biological Plant Protection and member of the Environmental Council at the Russian State Duma: "Global warming is very beneficial for Russian agricultural production. According to climate scientists, annual average temperatures have been increasing annually [in Russia], while in the rest of the world the process has been much slower. As a result, the natural productivity of Russia's agricultural lands will almost double in 20 years, and the country will become the largest exporter of food. In 2015, Russia will be able to supply 15 percent of the world export of organic wheat. The reason is simple: It is three times more expensive to grow organic grain in Europe. Russia's farmlands are free from chemicals, fields are fertilized by manure and cost of labor is low. Analysts think that Russia could supply the global market with $100 billion worth of organic and relatively cheap food, including wheat. "

Russia, although behind other countries, has joined the global rush for renewable energy sources. The State Duma is considering a bill that will promote the development of energysaving technologies.

Russia is joining the race for renewable energy sources. However, the country is a novice to this business, having only experimented with biofuels, and never produced it in quantity. Today's research is only the first step. "Like European countries, we should approve a national program," said Academician Ilya Moiseyev, inventor of bio-kerosene.

There is sizable opposition to using agricultural products for fuel. "From a selfish point of view, biofuels are a good thing for developed countries. But it is very dangerous for the rest of the world, and the price of development could be too high," longtime Moscow Mayor Yury Luzhkov has said. He added that "the production of biofuels is one of the most important and destructive factors in the surge of global food prices." Additionally, it could poison farmlands with genetically modified crops full of fertilizers and chemicals.

"Russia could use its agricultural waste," said Sergei Varfolomeyev, Director of the Biochemical Physics Institute at the Russian Academy of Sciences. "Straw, stems, and the tops of crop plants can be used in producing biofuels." However, this production is not profitable yet. Five of Russia's regions started projects for the growth of European biofuel products, allocating farmlands to grow soybeans, rape (canola) and other oil crops. The end product is planned for export because there is currently no demand in Russia.