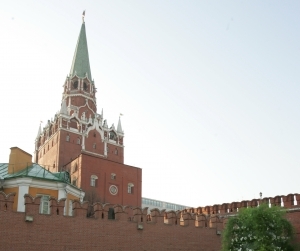 Barack Obama's victory had not the slightest influence on the Kremlin, where demonstrative anti-Americanism has become something of an official creed.

This was on display in President Dmitry Medvedev's state-of-the-nation address on Wednesday.

Predictions about the future of relations between the two countries can be best summed up in the joke about the optimist and the pessimist.

The pessimist says, "Everything is horrible." The optimist responds, "Don't worry, things are bound to get worse."

The Kremlin's reactions have not just been the results of plans for U.S. missile-defense bases in Central Europe, military bases in Bulgaria and Romania or the push for NATO membership for Ukraine and Georgia.

U.S. President George W. Bush has played a vital, if not decisive, role in forming the Kremlin's perception of how the world works. The U.S. invasion of Iraq was central here, leading the Kremlin to the conclusion that the rule of law was nothing more than a screen to hide a country's real intentions. Only a fool would be taken in by talk of international law by an administration acting like that in Washington.

The country's leaders see the world as operating according to the principles understood by St. Petersburg street thugs. Prime Minister Vladimir Putin seems to believe sincerely in a world order in which one must continually prove one's strength by beating up on the weak. Politics is a constant turf war against thugs from "outside the hood," and no mercy is shown to anybody who shows his face after dark on the wrong side of the street.

The only way to dominate in this kind of world is to form the strongest gang while trying to avoid a direct confrontation. This is how Putin sees the world.

The description of such an order as "multipolar" favored by Russian diplomats is a simple matter of political correctness. The Kremlin has no interest in equal rights and responsibilities for other states. Instead, the world should belong to the big boys on the block, who can swallow their enemies and divide the neighborhood into "zones of interest." Hence, the idea of a European Security Council with permanent members with vetoes.

The question is: What course should a new U.S. presidential administration pursue in response to such a "street gang" mentality?

First, it should dump the condescension toward Russian democracy and stop drawing distinctions between its own "proper" form and that of other states. Trying to convince members of Congress and other officials to tone down their rhetoric would also help.

Second, the new president should stop pushing NATO membership for Ukraine and Georgia. Russia will probably have to be governed "manually" for the next 20 years, as democratic institutions are not developed enough to function on their own as they do in the West. But Tbilisi and Kiev still parade around proclaiming that their democratic institutions have matured enough to meet the membership requirements for Euro-Atlantic organizations.

Third, the new administration should treat the relationship with Russia as one would with a military superpower — the only country capable of threatening the destruction of the United States — but without letting things get to the point of direct confrontation or a new Cold War.

The question is whether Obama's character and experience provide him with any chance of understanding Putin's streetwise approach to the world. The answer is probably no, which means that we cannot expect any significant improvement in relations. Even if Obama follows through on the promise to freeze the deployment of U.S. missile-defense batteries in Europe, it would not improve relations with Moscow. The Kremlin would find another reason for continuing the farcical Cold War.

The problem is that there is always the risk that it could lapse into real confrontation.

In his latest speech, U.S. Secretary of Defense Robert Gates called for speeding up the signing of a new strategic nuclear weapons treaty with Russia, giving the impression that it is finally acceding to something Moscow has been suggesting for the past six years.

This means, in practice, that the United States is returning to the principle of mutual deterrence — an approach that carries its own threats, even if there is no direct conflict involved. There is no guarantee Washington will show restraint indefinitely if the Kremlin confronts it with such a Cold War — a war so far limited to rhetoric and stunts like sending warships to Venezuela. If it degenerates into direct conflict, the world will look far different from what the Kremlin's street sense would suggest.