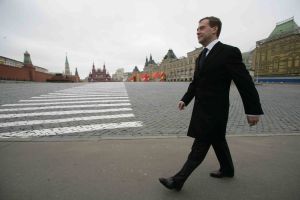 Both presidents will have to take a tough stance more than once, and we see Medvedev's intention to do so in his first state of the nation address.

Devoted to international issues, the first part of the address relates not to Obama but to George W. Bush, his predecessor, and the inheritance he left to the international financial system, Russian-U.S. relations and Euro-Atlantic security. In a way, it is good that Obama has received this address from Moscow on his best day in the next four years. But will he hear and understand it, and will he find common ground with Russia?

Medvedev mentioned old problems, such as the deployment of the U.S. missile shield in Europe, but this is the first time a Russian president put two different problems side by side.

"We will not give up in the Caucasus. We will overcome the global economic crisis and emerge from it stronger," Medvedev said.

He also made statements showing he views these two problems as comparable and even interrelated.

"It is no use denying that the Tskhinvali tragedy was a consequence, among other things, of policies conducted by the U.S. administration that were over confident and intolerant of criticism, preferring unilateral decisions," he said.

Medvedev has called for mechanisms to be established to block "misguided, selfish and sometimes dangerous decisions" by some members of the international community.

The latter could be part of the economic context, but then it may be not.

Barack Obama will have to watch as the Group of 20, representing the world's largest economies, meets in Washington on November 14-15 when his predecessor will still be the boss in the Oval Office, to discuss medicines for the ailing global economy.

It seemed that French President Nicolas Sarkozy was the most radically minded leader on the issue, but look what Medvedev said in his address to the parliament: "The lessons of the mistakes and crises of 2008 proved to all responsible nations that it is time to act and radically reform political and economic systems."

He added that Russia would cooperate on this issue with the U.S., the EU, and BRIC (Brazil, Russia, India and China) colleagues - and with all interested countries.

He was likely referring not to one but to two crises, including the one in the Caucasus, or why the word "political"?

Russia and probably other countries fear that the U.S. may be contemplating not a financial, but a military solution for the current crisis. Will it attempt this in the Caucasus? Bush's 19 guests will definitely try to dissuade such a move.

A currency attack on the financial systems of other countries was attempted during the Asian crisis in 1997-1999. This is a kind of aggression, which we cannot rule out now.

It is not clear from Medvedev's state of the nation address what he will say in Washington on November 15. However, he mentioned a "self-sufficient financial system capable of rebuffing any external challenges," which could mean anything.

So, Russia will not "give up" in the Caucasus. It will not withdraw its recognition of Abkhazia and South Ossetia, and it will not tolerate possible new Georgian aggressions. But did Medvedev mean only that when he said, "We must know firmly that there are some things you must not give up"?

Moscow apparently thinks that the two crises - the financial crisis and the conflict in the Caucasus - must be used to improve the economic and other elements of the international system. And Obama is likely to take part in the process, especially since it was not Russia who initiated it. Russia only joined other countries wishing to solve this problem.

Russia also expects the U.S. to "renew its approaches" to all complicated problems, including foreign policy, as Russia's first deputy foreign minister, Grigory Karasin, has said.

If the beneficial process begins, Moscow will soften the tone.