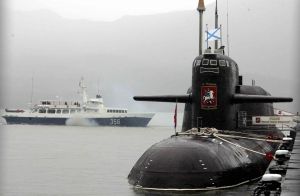 A commission investigating an accident on a Russian nuclear submarine that killed 20 people and injured another 22 said on Monday the probable cause was a malfunction in the vessel's fire safety system.

The tragedy, the worst since the sinking of the Kursk in 2000, occurred late on Saturday while the Nerpa nuclear-powered submarine was undergoing sea trials in the Sea of Japan. Three submariners and 17 shipyard workers died in the accident - 208 people, 81 of them submariners, had been on board the vessel.

The governor of the neighboring Khabarovsk Region said the investigation revealed that the fire safety system had operated correctly.

Earlier Capt. 1st Rank Igor Dygalo, an aide to the Russian Navy commander, said that the submarine's reactor had not been affected by the accident, which occurred in the nose of the vessel, and radiation levels were normal.

Meanwhile, Khabarovsk Governor Viktor Ishayev said on Monday the investigation suggested that human error could have been a factor in the deaths.

"The ship has the latest fire-extinguishing system, a computer-activated alarm" Ishayev said. "According to the investigation, there is no evidence that a person was involved in the system's operation."

Investigators said the deaths were caused by suffocation after Freon gas was released following activation of the submarine's fire safety system.

He added that those working in the area that had donned breathing apparatus had survived, while those who failed to use safety equipment had all perished.

Gennady Illarionov, a former naval submariner, told RIA Novosti, "You can't rule out that some of the civilians had not been issued with portable breathing apparatus or didn't know how to use them,"

And a high-ranking source at the Pacific Fleet's headquarters also questioned why portable breathing apparatus had not been used, "Perhaps the submariners did not notice the gas being released and when they realized it was already too late."

Tuesday has been declared a day of mourning in Primorye Territory, where the Russian Navy's Pacific Fleet is based.

The incident is the worst for the Russian Navy since the sinking of the Kursk submarine in 2000 when all 118 sailors onboard died.

Memorials honour 20 victims who suffocated to death on sub