The Iskander: a story of a new face-off 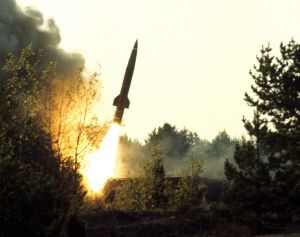 This was clear before and is clear now, after Dmitry Medvedev has described ways in which Russia will respond to the challenge in his state-of-the-nation address.

If countermeasures are necessary, Russia will deploy the Iskander theater missile system in Kaliningrad. In addition, according to the Russian president, it also plans to use electronic countermeasures against the missile defense shield.

The president's statement is easy to explain: deployment of an anti-missile system in Poland and the Czech Republic is a direct threat to Russia's nuclear potential. The 10 ground-based interceptor (GBI) missiles, planned for Poland, or even 50 such missiles, cannot of course parry a full-scale strike by the Russian Strategic Missile Forces and missile-carrying submarines, but the strategic importance of these interceptor missiles would increase were the U.S. to deliver a first nuclear strike against Russia. In this scenario, interceptor missiles would have to take on the limited number of missiles surviving the first strike, which would allow the U.S. to hope for success and, for the first time since the 1950s, for a victory in a nuclear war.

Iskander theater missile systems have long been viewed as an answer to the possible appearance of elements of a U.S. anti-missile system in Eastern Europe. The range of the Iskander in its basic form is 300 kilometers. In the opinion of missile specialists, it can easily be extended to 500 kilometers and more should Russia decide to tear up the 1987 Intermediate Nuclear Forces (INF) Treaty.

In addition, the Iskander can be equipped with more than ballistic missiles. The system can also launch long-range cruise missiles - R-500s have already been test-fired from the Iskander. Potentially, the range of a cruise-missile system can exceed 2,000 kilometers, making it possible to hit targets across Western Europe.

Iskander mobile launchers, deployed in Kaliningrad and, potentially, in Belarus, will be capable of delivering a sudden strike, including nuclear warheads, at most of Poland even in standard configuration. Rapid deployment - which takes a few minutes - and the characteristics of the missile itself - increase the probability of engaging targets, especially in view of the fact that main targets - GBI interceptor missile launchers - are fixed.

The deployment of Iskanders and electronic countermeasures in Kaliningrad is certain to produce a response from the United States. Its first step will be to hand Patriot ground-to-air missile systems to Poland - an agreement to pass a Patriot battery (12 launchers) with an ammunition load of 96 missiles to the Wojsko Polskie has already been achieved. However, Patriots do not guarantee the safety of GBI missile launchers, and to make them more secure the U.S. might reinforce Poland's Air Force with modern strike aircraft able to destroy Iskanders before they launch their missiles. U.S. Air Force units and formations are likely to be deployed in Poland directly.

Russia understands the likelihood of such a development of events. So, in addition to deploying Iskander missile systems and electronic countermeasures in the Kaliningrad Region, it can strengthen its grouping of ground, air force and air defense troops in the area, both by bringing up existing units to scale and by sending in reserves from inside districts.

Undoubtedly, such an escalation will increase tensions in Eastern Europe. We are currently observing a reopening of the Cold War's European front, which is now moved several hundred kilometers eastwards. Russia started warning of the undesirability and danger of deployment of a U.S. anti-missile system in Europe many years ago. Its statements have gradually intensified in expression, from regrets over the lack of a normal dialogue to a direct threat to suppress the system with force. The U.S. has meanwhile only chanted the mantra of the anti-Iranian purpose in its European missile shield. The question of "why a missile defense system cannot be deployed in Turkey" has never been completely answered.

To sum up, we have the following picture: an "anti-Iranian" missile defense system will be deployed in the next two to three years in an area clearly beyond the reach of Iran's existing and projected missiles, but very convenient for intercepting missiles launched from European Russia in a northern and a north-western direction. The immediate targets of this system are the 28th, 54th, 60th and other Strategic Missile divisions deployed west of the Urals. A simple look at the numbers shows that although there are several Topols and UR-100s for each American interceptor, this ratio would only stand until the first nuclear strike.

The concern is that it could be tempting to initiate a strike when you have a system that protects against retaliation. It is only to be hoped that a new U.S. administration will hear Russia's case and agree to develop a mechanism of collective security in Europe. If not, development could be hard to predict.